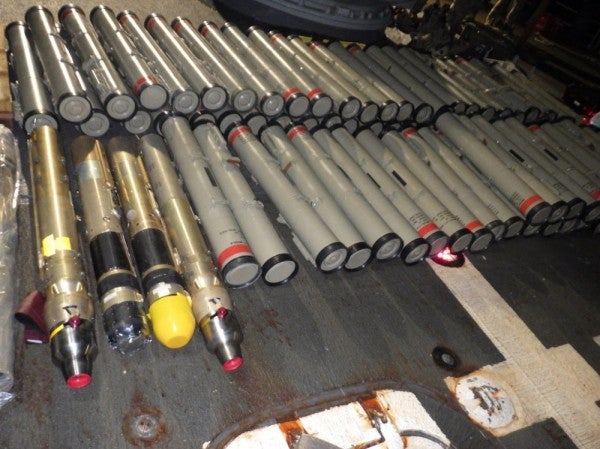 A Navy guided missile cruiser uncovered a huge stockpile of heavy weaponry on Sunday when it boarded a stateless dhow (a traditional Arab sailing vessel) in the Arabian Sea that was chock full of surface-to-air-missiles and anti-tank missiles intended for Houthi rebels in Yemen.

According to a statement released by U.S. Central Command on Thursday, the weapons discovered by the USS Normandy included 150 'Dehlavieh' anti-tank guided missiles, which are Iranian-manufactured copies of Russian Kornet ATGMs.

CENTCOM said the haul was similar to a seizure of advanced weapons made in November by the guided missile destroyer USS Forrest Sherman, which also occurred in the Arabian Sea. Those weapons were also Iranian and bound for the Houthis, a Yemeni Shiite group that is fighting Saudi Arabia in what many see as a proxy war with Iran.

Supplying the Houthis with weapons is illegal according to a United Nations Security Resolution, CENTCOM said. The seized weapons are now in U.S. custody, awaiting final disposition by interagency and international partners, the command said.

At the time of the boarding, the Normandy had been conducing routine maritime security patrols in the U.S. Fifth Fleet area of operations, CENTCOM said.