As the world waits to see if President Donald Trump will launch military strikes against Syria, you can count on... 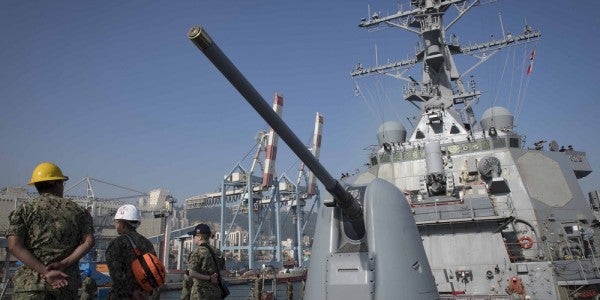 As the world waits to see if President Donald Trump will launch military strikes against Syria, you can count on the media to provide you with nuanced, well-sourced stories that provide context…. Oh, who are we kidding: It’s like watching pigs in shit.

One of the most egregious offenders so far has been CNN Turk, which reported that the destroyer USS Donald Cook is lurking off the Syrian coast, ready to retaliate against a Syrian chemical weapons attack with 60 Tomahawk cruise missiles. CNN Turk also reported that the ship had been buzzed at least four times by Russian aircraft. The story has been aggregated by other media outlets.

On the surface, the story looked like a blatant OPSEC violation. Citing “Pentagon offcials,” CNN Turk did practically everything except tell the Syrians, Russians, Iranians, and Hezbollah where best to hit the Donald Cook with their anti-ship missiles, or at least disrupt their mission.

But according to the Pentagon officials Task & Purpose spoke with, the CNN Turk story is full of more holes than Osama bin Laden’s body.

“There are elements of that story that are just simply not true,” said Navy spokesman Cmdr. Bill Speaks, who called the reporting that the ship had been buzzed by Russian aircraft “competely bogus.”

The Donald Cook is also not in Syrian waters, Speaks told Task & Purpose on Tuesday.

While it is public knowledge that the destroyer recently made a port call to Cyprus, the Navy has been intentionally vague about where the ship is now, a policy that extends to all deployed ships to protect their crews and missions. Speaks declined to say whether the Donald Cook, or any other ship, would be part of possible missions against Syria.

The Navy can confirm when ships leave port on routine deployments, such as Wednesday’s planned departure of the Harry S. Truman Carrier Strike Group from Norfolk, Virginia, but the sea service never says specifically where ships are headed, he said.

“We have been careful to not get too specific in talking about at sea locations to preserve some strategic ambiguity, and I think we’ve done that,” Speaks said. “We’ll always have reports that we have to deal with that are poorly sourced or just outright false, but I think we’ve been pretty careful to ensure both OPSEC and that we preserve strategic space for the secretary and the president, in any type of response.”

Speaks also refused to say how many Tomahawk cruise missiles the Donald Cook might be carrying. He added that he has no idea where CNN Turk’s information came from, because no one in the Navy has told media that the ship has 60 Tomahawks.

When asked if the CNN Turk story rises to the level of an OPSEC violation, Speaks said the onus is on the Navy – not the media – to avoid publicizing sensitive information.

“I would never characterize what you guys do as an OPSEC violation,” Speaks said. “Only we can commit OPSEC violations. Reporters don’t. You guys just report.”