How to use military service as a political prop: Don’t 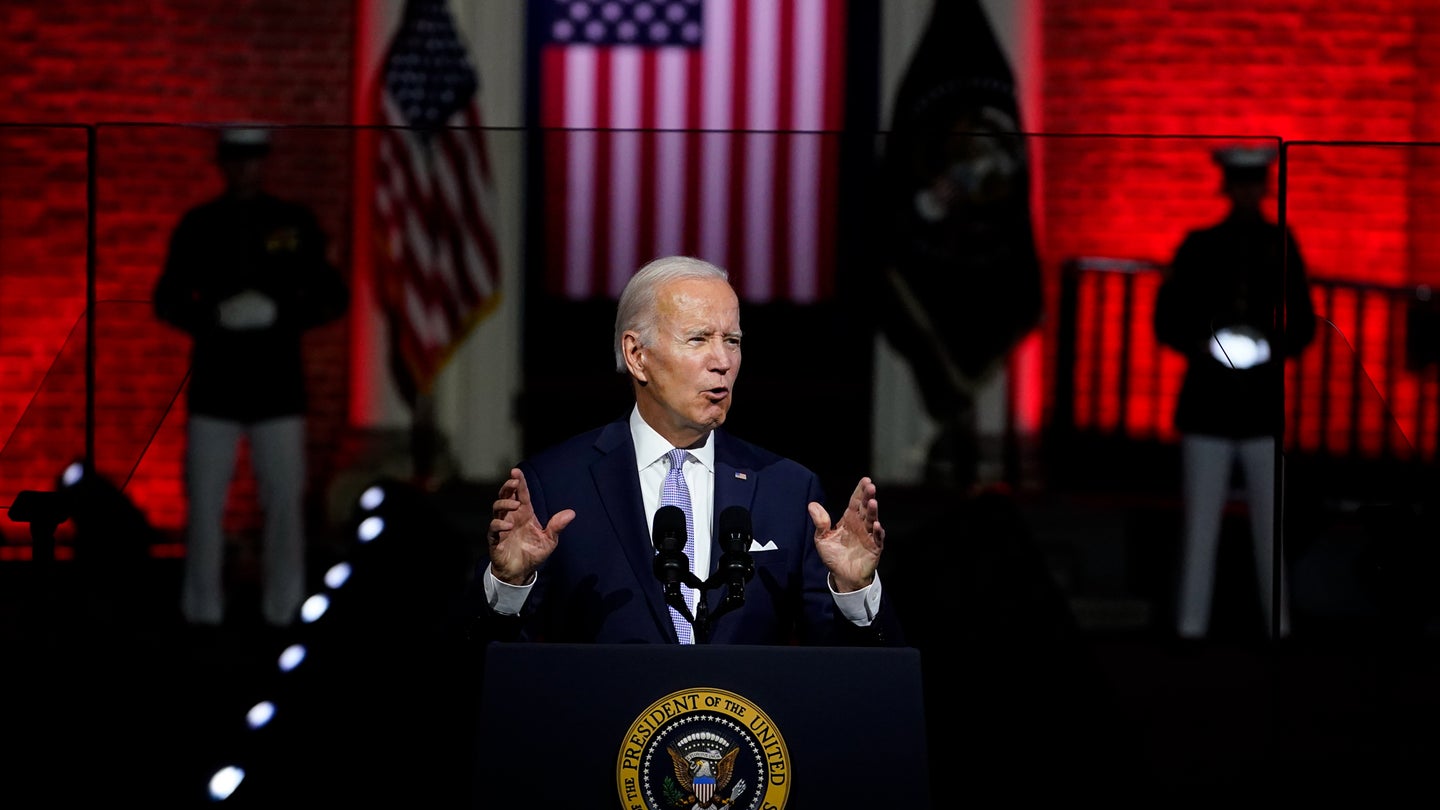 A little-known law of the universe appears to be that we can only go so many months without a debate over politicizing the military.

That debate came roaring back over the last few days after President Joe Biden delivered an address in Philadelphia about the threats to “equality and democracy” posed by former President Donald Trump and “MAGA Republicans.” As he spoke, Biden was flanked by two Marines in the background, which immediately drew criticism from those who saw it as an inappropriate display of the military during a political speech.

Then, just days later, an Army Reservist and Republican candidate for Arizona Attorney General shared a photo of himself holding a handgun in uniform, igniting conversation once again on what is and is not allowed when it comes to service members running for office.

“My opponent says she’ll defend ‘democracy,’” tweeted Abe Hamadeh, an intelligence officer in the Army Reserves who was recently deployed to Saudi Arabia, according to his website. “Believe me Kris, you don’t know how.”

While the two instances are different in terms of policy — Hamadeh’s is a violation of Defense Department policy, while experts say Biden’s use of Marines was a violation of norms — they come to the same conclusion: When considering using the military or service members as political props, the answer is to not.

“These are professionals,” Kate Kuzminski, director of the Military, Veterans and Society Program at the Center for a New American Security, told Task & Purpose. “We look at the all-volunteer force, it is a group of professionals who are tied to the mission. So there isn’t really a place for it anywhere. And that’s a civilian’s responsibility, to protect the military from even having the appearance or the optics work against their favor.”

In Hamadeh’s case, Kuzminski said the reservist’s tweet was in violation of Defense Department Directive 1334.10, which states that service members not on active duty are prohibited from using photos of themselves in uniform “as the primary graphic representation in any campaign media.”

“It’s something that was so widespread, and intended to be widespread, so he kind of set himself up for failure there because he is in direct non-compliance with DoD policy,” Kuzminski said.

And while Hamadeh does use the same image on his campaign website, in that instance, it’s by the book. The DoD policy says service members can use photos of themselves in uniform “when displayed with other non-military biographical details,” and when the individual clearly displays a disclaimer that they are not endorsed by the Defense Department, which Hamadeh does.

Aside from violating policy, Hamadeh was immediately mocked online for misrepresenting his Army responsibilities. While Hamadeh is holding a pistol in the photo he tweeted about defending democracy, seemingly insinuating he can or has fought in combat, his campaign website says that he was deployed to Saudi Arabia for 14 months negotiating military sales and managing “training for Saudi Arabia’s domestic security forces.”

The tweet was criticized as “the most boot shit I’ve ever seen,” with several people pointing out the lack of a combat patch on the right sleeve of his uniform.

“Bro the most violent thing you do every day is stapling,” one person commented.

Hamadeh is far from the first person to use their military service in a political campaign or other political context. Fellow Army Reserve officer and former congresswoman Tulsi Gabbard posted a video on Twitter last year speaking in uniform about “self-serving politicians” who would “lead us now into the apocalypse of World War III.” Another Army Reserve officer conducted a campaign interview in uniform last year and was subsequently put under investigation by the Army Reserve. And in 2020, the supervisor of two Army Reserve soldiers who appeared in a Democratic National Convention video was disciplined for violating Defense Department policy.

And while those are rather clear violations of policy, the inclusion of the military in political activities by the president is more of a violation of norms.

“It’s not a matter of breaking rules, but it is a matter of breaking norms,” Kuzminski said. “Particularly since that specific speech had a political tone to it, but essentially using the military in the background for any policy or political discussion that doesn’t directly affect — it’s not military policy he was talking about — so the optics are bad.”

Biden’s critics immediately pounced on the appearance of two Marines standing behind him during his speech last week, which the White House later said was intentional. While much of the criticism came from conservative outlets like the National Review and Fox News, some criticism also came from veterans.

Retired Army Lt. Gen. Mark Hertling praised Biden’s speech as something “needed at this time in our history,” but said he did not think the president should have had the Marines in the background.

Paul Rieckhoff, founder of Iraq and Afghanistan Veterans of America (IAVA) tweeted that even if the inclusion of the Marines wasn’t intentional, “it’s just sloppy.”

“Plenty of people in the White House know better. Or should,” Rieckhoff said. “Either way, there’s just no need to have it even as a concern. It just shouldn’t be done in America.”

Allison Jaslow, a combat veteran and former executive director of the Democratic Congressional Campaign Committee, told CNN’s Brianna Keilar — an Army spouse herself — that it’s “not right if a Democrat uses the military as a political pawn, and it’s not right if the Republican party does it as well.”

Indeed, the last administration under Donald Trump was criticized for doing so regularly. Keilar went on to acknowledge that Trump’s administration politicized the military “so much,” including by sending the National Guard to the southern border “when it’s not in the purview to be domestic law enforcement.”

She also mentioned one high-profile incident in the summer of 2020 when Trump walked through Lafayette Park in D.C., which had just been forcefully cleared of protestors, alongside the Chairman of the Joint Chiefs of Staff Gen. Mark Milley and Defense Secretary Mark Esper. And while the situations are different — the Marines, for example, do not have the authority or rank that Milley carries — Kuzminski concluded that neither situation is appropriate.

“I do think there’s a game of ping-pong that’s happening because you had a number of Democrats up in arms bout Milley being in Lafayette Square. And now you have a bunch on the right who are up in arms about the Marines being used at Independence Hall. But I do think that there’s a very small subgroup of civ-mil folks who were up in arms in both situations,” Kuzminski said. “And so I think the people who study this stuff were equally up in arms for both of those situations.”