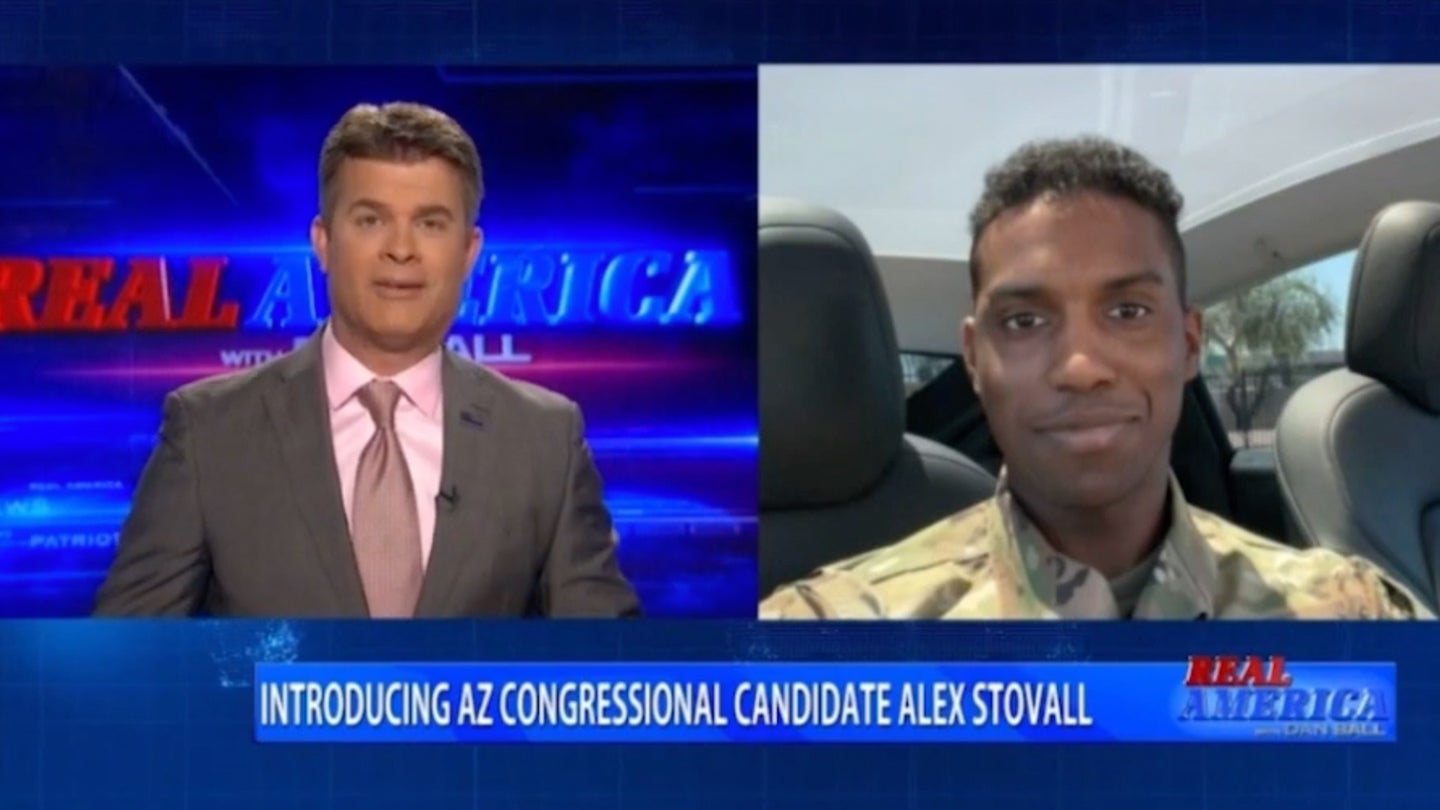 The Army is investigating a reserve officer who used photos of himself in uniform in an ad for his congressional campaign, conducted a campaign interview in uniform, and said he doesn’t think President Joe Biden is actually the president of the United States.

1st Lt. Alex Stovall, 26, says he is running to represent Arizona in Congress to “stop [Rep. Alexandria Ocasio-Cortez] and her cronies from taking over our congress and our country.” The Republican’s campaign video features photos of himself in uniform, and, while in uniform, he conducted an interview with One America News Network, a right-wing news organization that has pushed election conspiracies. (Stovall links to those videos on his campaign website.)

“I got a last-minute call so I’ve been helping soldiers today,” Stovall, who joined the Army in 2013 and is assigned to the 91st Training Division, 84th Training Command, explains at the top of the interview.

In a separate interview with Gun Freedom Radio, during which he is not in uniform, Stovall, a former non-commissioned officer, refers to Biden — the military’s commander-in-chief — as “this sleepy guy in office,” saying he doesn’t “think he’s president.”

Soldiers in the Army Reserve who are not on active duty are prohibited from participating “in any partisan political activity in uniform,” according to Army regulations.

Lt. Col. Simon Flake, an Army Reserve spokesman, said on Friday that the service is “aware of the situation and are investigating,” though he did not clarify what specifically was being investigated due to its ongoing nature.

“The U.S. Army Reserve follows the Department of Defense’s long standing policy regarding service member involvement in partisan political campaigns to avoid the perception of DoD sponsorship, approval, or endorsement of any partisan political candidate, campaign, or cause,” Flake said.

Stovall did not respond to questions from Task & Purpose for this article, though his press secretary told Army Times, who first reported the investigation, that the campaign “has followed all USAR and DOD regulations.”

“Alex Stovall is proud to be in the USAR and he decided to run to serve his country in Congress as well,” Joel Bailey told Army Times. “Americans are tired of seeing this country lurch further left toward policies that hurt them.”

Stovall has made several claims and remarks on his website, in interviews, and in his campaign video, that don’t appear to line up with his service record provided by the Army. While he identifies himself in his campaign ad and on Twitter as an Army chaplain, for example, his service record lists his military occupational specialty as a Chaplain Candidate. Army regulations say that chaplain candidates “will be addressed orally by their rank and will be identified, in writing, as chaplain candidate.”

In his campaign video, Stovall says he doesn’t “fight for this country to watch it get taken over by AOC,” and in his interview with Gun Freedom Radio, the host introduces him as running for congress “because our freedoms that he and his fellow veterans have fought and died for are in jeopardy.” According to his service record, he has never deployed to a combat zone.

In the same interview, Stovall says he was considering going “back to the active component” last summer when he decided to run for Congress. According to his service record, he has never served in the active component of the Army, though he does have an Overseas Service Ribbon, which is awarded to those who served outside the borders of the United States. It’s unclear where Stovall served overseas.

Stovall is the second soldier-turned-congressional candidate under investigation this month; the Defense Department is investigating former Army officer Harold Earls after he used footage of Arlington National Cemetery and Gold Star families burying loved ones in his campaign video, which has since been taken down on YouTube.

The congressional campaigns come at a time when the military has been working to better define the difference between acceptable and unacceptable political involvement in the wake of the riot at the U.S. Capitol in January. Defense Secretary Lloyd Austin mandated in February that leaders throughout the services hold “extremism stand-down” conversations with their units to discuss prohibited behavior for service members.

During one such conversation that Task & Purpose listened to, a senior Army official told their staff that the conversations are “not about politics.”

“Whether you’re a Republican, a Democrat, a conservative, a liberal, an independent, or a libertarian, it does not matter,” the official said. “We are not here to alienate supporters of a specific party or individual, but to identify behaviors and groups that look to bring harm to our country and bring harm to our Army.”