Pentagon: Don’t blame us for the massive security failure at the Capitol

"Overall, the assessment that we got repeatedly was no indications of significant violent protest." 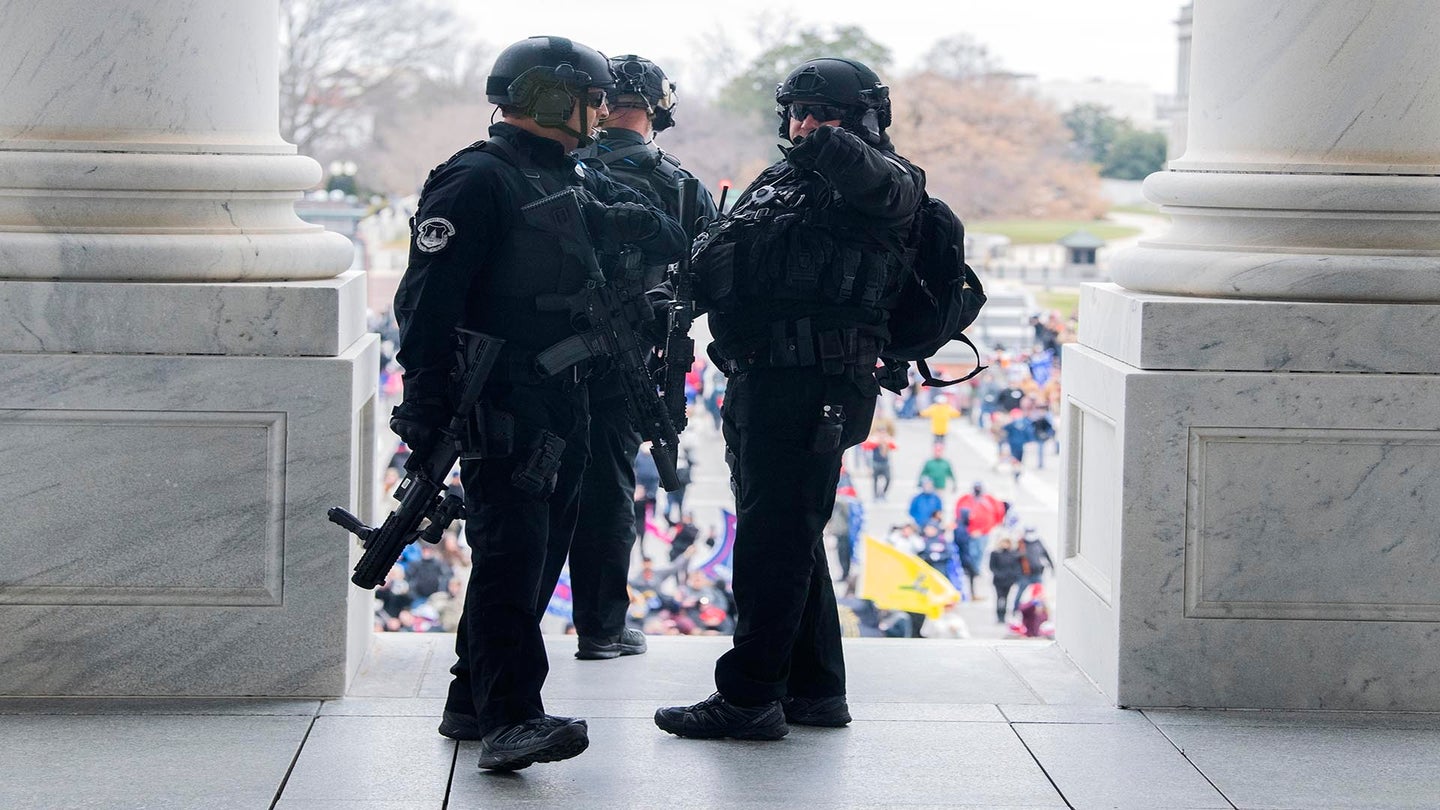 UNITED STATES - JANUARY 6: Capitol Police officers stand guard over rioters on the East Front before some broke into the Capitol to disrupt the joint session of Congress to certify the Electoral College vote on Wednesday, January 6, 2021. (Photo By Tom Williams/CQ Roll Call via AP Images).
SHARE

Defense officials placed the blame for failed security and weak law enforcement response to Wednesday’s Capitol riots on law enforcement agencies in a call with reporters on Thursday, maintaining that they were in a supporting role and were responding only as asked.

“We don’t do domestic [intelligence] collection,” Pentagon spokesman Jonathan Hoffman said. “We rely on Capitol Police and federal law enforcement to provide an assessment of the situation they foresaw and based on that assessment that they had, they believed they had sufficient personnel and did not make a request.

The police response to Wednesday’s breach of the Capitol building by a mob of protestors was lacking, to say the least. One striking video shared on Twitter showed a mob of people yelling as they entered the building, with only one officer standing in their way. At one point, the officer ran up the stairs as others gave chase.

Capitol Police Chief Steven Sund said Thursday the “violent attack on the U.S. Capitol was unlike any I have ever experienced in my 30 years in law enforcement here in Washington, D.C.”

Another video posted online appeared to show a police officer taking a selfie with one of the people who had stormed the building.

Army Secretary Ryan McCarthy said that in the midst of the chaos on Wednesday, it was clear that the Capitol Hill police were “overrun.” There have since been calls for Sund to resign his position, including from Speaker of the House Nancy Pelosi.

McCarthy explained on Thursday that in the days before Wednesday’s riots, D.C. Mayor Muriel Bowser put in a request for support from the D.C. National Guard, of which McCarthy holds the authority to mobilize, on Jan. 5 and 6.

Through a “mission analysis” conducted on Dec. 31 and into the weekend, McCarthy said it was determined that there was a need for around 340 guardsmen to “support traffic control points, metro station crowd facilitation, as well as a chem-bio hazardous materials team on standby to support law enforcement.” Others within that group include a 40-person Quick Reaction Force (QRF) at Andrews Air Force Base, Md. and others tasked with logistics. Despite a “series of meetings” leading up to Jan. 6 with agencies including the Department of Homeland Security and Capitol Hill Police, no other requests were made, McCarthy said.

McCarthy also said that the intelligence regarding the expected size of the crowds on Wednesday was “all over the board,” with different estimates ranging from 2,000 to 80,000 people. The assessment of the situation clearly changed on Wednesday as a mob invaded the Capitol building. As chaos ensued, McCarthy said it was “very, very hard to get the adequate read” of what was happening with the Capitol Hill police, and how guardsmen could “tie in with them and then start this operation.”

“Over the course of an hour or so, it was clear there was tremendous confusion coming out of the Capitol,” McCarthy said. “And that’s where leaders all descended and put a hasty plan together, and moved very quickly to clear the Capitol and get the Congress back in there by 8 p.m. so we could certify the election.”

The sheer lack of preparedness on Wednesday was better put into perspective when McCarthy said on Thursday that the Defense Department “did not conduct any planning or contingency planning on the Capitol.”

“[Law enforcement] would have had to request that in advance to say, in the event of an issue, we’d have the following criteria of us to support them,” he said. “Obviously in order for us to support another branch of government, they’ve got to ask us. The request has to come to us.”

As many have pointed out, while the storming of the Capitol happened quickly, there was plenty of heads-up online. The gathering of Trump supporters on Wednesday was not a surprise, nor was it last-minute. President Donald Trump tweeted and shared others’ tweets about the “wild” protests coming on Jan. 6 again, and again, and again.

Reporters who cover disinformation and and conspiracy theories said that Wednesday’s events were not surprising as the people who showed up have threatened to do so “for years.”

Ken Rapuano, the Pentagon’s assistant secretary for homeland defense, said on Thursday that while there were “general descriptions of some of the internet traffic” that was discussed “in several of the calls” they had with other agencies, it ultimately wasn’t of much concern. “Overall, the assessment that we got repeatedly was no indication of significant violent protest,” Rapuano said.

After the siege, many were asking about the difference in the show of force when compared to the National Guard’s response to the Black Lives Matter protests over the summer brought about by the killing of George Floyd in May. McCarthy said they were different situations because there were days of building unrest in the wake of Floyd’s death, whereas Wednesday’s violence exploded within hours.

“That transpired over several days,” McCarthy said of the George Floyd protests. “Yesterday was a very short fuse. … When we got the call around, just shortly before 2 p.m., we had mobilized our entire guard, moved our personnel off of their traffic control points back to the armory, put on riot gear, and were in position in less than two hours to then go and help support the clearing of the Capitol.”

“Clearly the Capitol was under duress, and if you’re under duress, minutes and seconds count. I appreciate that from my time in uniform, I get it,” McCarthy said. “But in this instance, people were moving hard and fast.”

McCarthy announced in a Thursday press conference a significant increase in National Guard troops for D.C. along with additional security measures in the area. He said that by the weekend, 6,200 guardsmen would be in the D.C. area — including the full D.C. guard, along with support from the New York, New Jersey, Pennsylvania, Delaware, Maryland, and Virginia Guards.

He also said that a non-scalable 7-foot fence was being erected around the Capitol building. The guardsmen and the extra security measures will stay in place for “no less than 30 days,” he said. Officials are also planning increased security measures for the inauguration of President-elect Joe Biden.

“From our perspective, we’re focused on what is the current operational need,” Hoffman said. “Our time horizon looking at this is through the inauguration of the president-elect, what do we need to do to help authorities in the National Capital Region to secure the NCR for that time period, and ensure there is a peaceful inauguration and transition.”

Featured image: Capitol Police officers stand guard over rioters on the East Front before some broke into the Capitol to disrupt the joint session of Congress to certify the Electoral College vote on Wednesday, January 6, 2021. (Photo By Tom Williams/CQ Roll Call via AP Images)