National Guard leaving D.C. but questions about the military’s response to protests remain 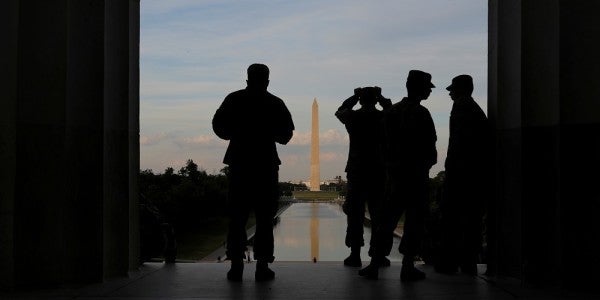 All out of state National Guardsmen are expected to leave Washington, D.C., within next 72 hours, Army Secretary Ryan McCarthy told reporters on Sunday.

Additionally, all of the active-duty units that were either deployed around the nation’s capital or placed on heightened alert have been stood down, McCarthy said in a conference call.

National Guardsmen from Maryland and New Jersey already left Washington, D.C., on Saturday, McCarthy said. They will be followed on Sunday by the Mississippi National Guard, which is needed back home because a tropical storm is brewing in the Gulf of Mexico.

Several media outlets have reported the president had wanted to deploy 10,000 active-duty troops to Washington, D.C., in response to the protests.

McCarthy said on Sunday that active-duty troops came very close to being deployed to the nation’s capital because the Defense Department did not know if it could get enough Guardsmen to Washington, D.C., quickly enough.

“We came right up to the edge of bringing active-duty troops here and we didn't”, McCarthy said. “You had the 82 Airborne Division at Fort Belvoir, [Virginia]. That’s how close we were.”

On May 31, protesters gathered outside the White House in response to the death of George Floyd, an unarmed African-American man who was suffocated by a white police officer.

National Guardsmen who were assisting police that night were pelted with bricks and five soldiers were hit in the head, McCarthy said. One of those soldiers suffered a serious concussion.

Separately, the District of Columbia National Guard is investigating whether any of its aircraft flew too low over protesters on June 1. Video shows a National Guard medical evacuation helicopter hovering just over demonstrators.

The New York Times has reported that McCarthy authorized the use of helicopters as part of the National Guard’s response to the June 1 protests. At the time, top defense officials were trying to persuade President Donald Trump to let National Guardsmen handle the protest rather can deploying active-duty troops to Washington, D.C., New York Times reporters Thomas Gibbons-Neff and Eric Schmitt first revealed.

McCarthy told reporters on Sunday that he had authorized the helicopters to “observe and report” on the protests. He declined to speak specifically about the medical evacuation helicopter incident because the matter is currently under investigation.

“There was no order to disperse the crowd,” said Army Maj. Gen. William Walker, head of the District of Columbia National Guard, told reporters on the conference call.

The most controversial aspect of the U.S. government’s response to the protests was when the United States Park Police to clear Lafayette Square on June 1 so the president could visit St. John’s Episcopal Church.

Walker said protesters had thrown fireworks, eggs and bottles of urine at National Guardsmen, but that is not the reason why Park Police moved against the protesters.

“I don’t know they advanced.” Walker said. “All I know is that we were directed to maintain the line.”