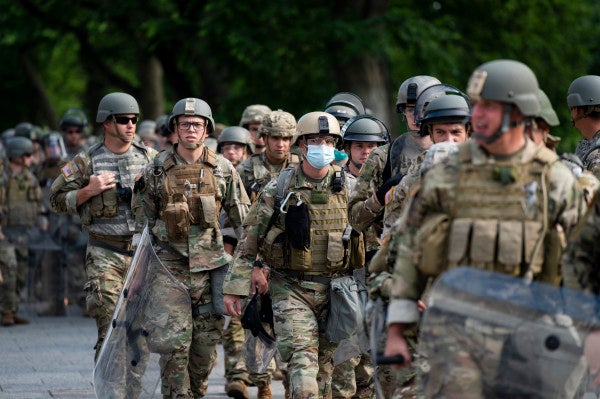 “We have had four peaceful days in a row,” McCarthy said during a Pentagon news briefing. “We’re projecting a fifth. We’re in a good posture because we’ve been able to generate enough personnel from the National Guard standpoint.”

Several hundred other active-duty troops will remain in the region, a defense official told Task & Purpose. Those service members will leave as conditions permit.

Roughly 1,600 active-duty troops in total were deployed to military bases around Washington, D.C., earlier in the week in case they were needed to help law enforcement agencies and the National Guard contain protests.

On Thursday, about 750 paratroopers with the 82nd Airborne Division that had deployed to the region returned to Fort Bragg, North Carolina, said division spokesman Lt. Col. Michael Burns.

Soldiers with the Army’s 3rd Infantry Regiment, known as the “Old Guard,” remain ready in case it is needed, defense officials said. The unit is based near Washington, D.C., and is tasked with responding to emergencies in the nation’s capital.

“We would like to get the alert status of the Old Guard off by the weekend,” McCarthy said at Friday's news briefing. “That would be my recommendation to try to get to that point.”