Minnesota's governor has not requested help from active-duty troops so far. 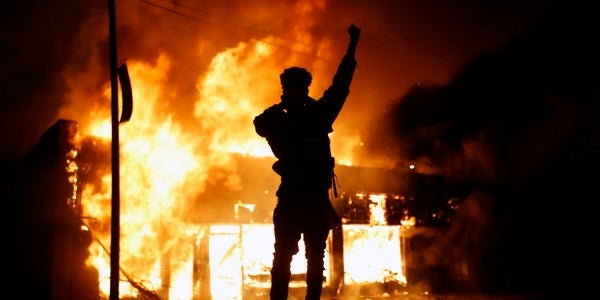 A Pentagon spokesman has confirmed that the U.S. military has notified several active-duty units to be ready in case Minnesota’s governor needs them to quell riots, but so far the troops have not been requested.

“As a prudent planning measure, the department has directed U.S. Northern Command to increase the alert status of several units should they be requested by the governor to support Minnesota authorities,” Hoffman said in a statement on Saturday. “These are units that normally maintain a 48-hour recall to support state civil authorities for several contingencies (like natural disasters) and are now on 4-hour status.”

Associated Press reporter James LaPorta first revealed that active-duty soldiers at Fort Bragg, North Carolina; Fort Drum, New York; Fort Carson, Colorado; and Fort Riley, Kansas, had been ordered to be ready within a matter of hours in case they are needed to deploy.

Those orders were sent verbally on Friday after President Donald Trump asked Defense Secretary Mark Esper for military options to bring riots in Minnesota under control, according to the Associated Press.

Esper has spoken personally with Minnesota Gov. Tim Walz twice within the past 24 hours to let him know that the Defense Department is ready to provide assistance to state and local authorities, Hoffman said on Saturday.

The riots in Minnesota and elsewhere across the United States came after a 7-minute video emerged that showed a white Minneapolis police officer with his neck on George Floyd, who is black, even though Floyd clearly says he cannot breathe. Floyd later died in a hospital. The officer, Derek Chauvin, was fired and later arrested.

Earlier on Saturday, the president told reporters that active-duty troops could deploy to Minnesota very quickly if local officials did not “get tougher” top stop riots.