The U.S. military has started sending jersey barriers to the Southwest border as the Pentagon prepares to mobilize a sizable... 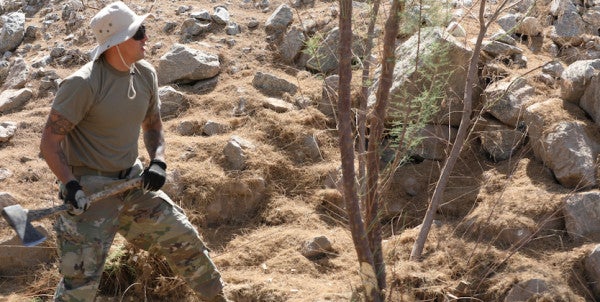 The U.S. military has started sending jersey barriers to the Southwest border as the Pentagon prepares to mobilize a sizable contingent of troops — including active duty Army soldiers — to help block a convoy of Central American migrants from entering the United States, the Associated Press reports.

Defense Secretary Jim Mattis told reporters on Oct. 28 that specifics are still being hammered out but indicated that plans for the deployment could be finalized as soon as soon as Sunday night.

On Friday, Mattis approved a request from the Department of Homeland Security to beef up military forces on the U.S.-Mexico border after President Donald Trump declared a slowly approaching wave of roughly 7,000 migrants a “National Emergency” on Twitter.

The caravan, which formed in Honduras, is currently about 1,000 miles from the nearest border crossing into the U.S., according to Fox News, traveling on foot at a pace of about 30 miles per day.

Numerous media outlets have reported in recent days that more than 800 additional U.S. service members are headed to the border to bolster the 2,100 National Guard forces who deployed there in April to support the Border Patrol. However, a Pentagon official told Task & Purpose on Saturday that troops levels for the upcoming deployment have not yet been set.

“We don’t have a specific number,” the official said. “At this point would advise straying from any number.”

The Pentagon has indicated that the reinforcements will fall under U.S. Northern Command — “in support of Custom and Border Protection” — and not the National Guard.

The troops who have been deployed to the border since April have played a largely behind-the-scenes role, as they are prohibited from interacting with migrants and most are barred from carrying weapons.

As AP notes, such missions are rare for active duty troops and it’s unclear why their involvement is necessary, as it seems the logistical and air support they are expected to contribute to the operation could also be provided by National Guard units, which states often tap for assistance with border security.