WTF: Guardsmen Can Patrol The US Border But Can’t Look Across It?!

The National Guard troops standing watch along the United States’ southwest border may find themselves curious to know what great... 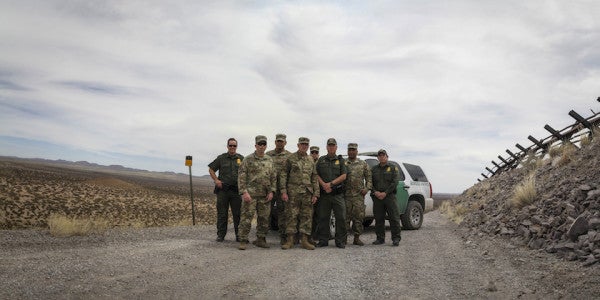 The National Guard troops standing watch along the United States’ southwest border may find themselves curious to know what great mysteries lay beyond the muddy waters of the Rio Grande… but alas, federal law forbids them from using their state-of-the-art surveillance equipment to find out.

While the roughly 800 guardsmen holding the line in Texas, New Mexico, and Arizona are permitted to use their naked eyes to peer across the divide, the legal basis for President Donald Trump’s National Guard deployment prohibits the troops from peeping southward through a pair of binoculars — or any other piece of technology that makes things appear closer than they actually are.

Trump mobilized the National Guard in April to help staunch what the president termed a “drastic surge of illegal activity on the southern border.” Secretary of Defense Jim Mattis authorized Title 32 duty status to deploy (and pay for) as many as 4,000 National Guard personnel in support of the Department of Homeland Security.

Upon their arrival at the border, the National Guard jumped into action, providing helicopter support to Border Patrol agents, paving roads, performing vehicle maintenance, and monitoring surveillance footage for suspicious activity north of the border.

“The troops stood on rocky, muddy cliffs on the river’s edge, peering through binoculars and focusing most of their attention on the banks and the brush on the American side,” a reporter with The New York Times wrote of a recent visit to a National Guard observation post in South Texas’ Rio Grande Valley. Rulebreaker!

They say curiosity killed the cat. In this case, it could earn a soldier a letter of reprimand. Title 32 provides that the National Guard can operate “up to” the United States-Mexico border, but that’s it. No peeking across! “We are not doing foreign intelligence collection on the border,” Col. Jamie Davis, a Pentagon spokesman, explained to the Times.

In addition to the surveillance restrictions, the troops are also prohibited from apprehending people or having any physical contact with migrants. Those duties are left to the Border Patrol, which is not shackled by the Posse Comitatus Act of 1878, the post-Civil War statute that limits military involvement in civilian law enforcement.

National Guard and Border Patrol officials describe the mobilization as a “force multiplier” and are already hailing it a success. Officials say the troops have helped arrest more than 1,600 illegal border-crossers and assisted in the confiscation of more than 1,000 pounds of marijuana. That’s a whole lot of grass.

But not everybody is so impressed.

Representative Vicente Gonzalez, a Texas Democrat, said in an interview with The New York Times that he thinks the money being spent on the National Guard mission should instead be used to hire more Border Patrol agents — in part because the citizen-soldiers are so constrained in what they can actually, legally, do out there.

“They have their hands tied,” Gonzalez said. “This is not what the National Guard Was designed for.”