NORTHCOM chief sees no military threat at the US-Mexico border

The head of U.S. Northern Command told lawmakers on Tuesday that he sees no military threat from foreign nationals crossing into the United States through the southern border, casting doubt on President Donal Trump's claims to a national emergency at the U.S.-Mexico border 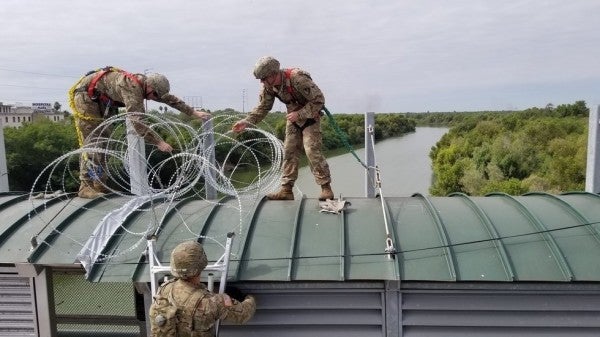 The head of U.S. Northern Command told lawmakers on Tuesday that he sees no military threat from foreign nationals crossing into the United States through the southern border, casting doubt on President Donal Trump's claims to a national emergency at the U.S.-Mexico border.

“A secure border does reduce threats to the homeland … it is not a military threat,” Air Force Gen. Terrence O'Shaughnessy told the Senate Armed Services committee. “But that's slightly different than the answer of whether military should be responding to the situation.”

Trump's Feb. 15 declaration of a national emergency at the U.S.-Mexico border was ostensibly designed to bypass Congress in order to fund the construction of a border wall in response to migrant caravans approaching from the south.

“I do see that any barrier in place to secure our nation does have some ramifications to our ability to defend against a military threat as well,” he told lawmakers, ” right now, there's not a specific military force from the south that we are trying to take action against.”

O'Shaughnessy's comments echo the rationale offered in military planning documents, obtained and published by Newsweek in November, regarding the 7,000-strong migrant caravan that precipitated Operation Faithful Patriot in 2018.

The documents, prepared by U.S. Army North, stated that “based on historic trends, it is assessed that only a small percentage of the migrants will likely reach the border,” and that those 20% who succeeded would do so with “no terrorist infiltration.'

Indeed, the Army documents stated that the nearly 200 armed militia members operating along the southwestern border “under the guise of citizen patrols” constituted a more imminent threat than the caravan stemming from the reported theft of National Guard equipment.

When it came to pointed questions regarding the legitimacy of Trump's national emergency declaration, O'Shaughnessy demurred, stating that he “did not recommend either way” on the matter during “multiple conversations” with Trump on the matter, per The Washington Examiner.

“No, sir, what I'm saying is from my perspective I get my orders from the secretary of defense and the president, and those orders are very clear to me,” responded O'Shaughnessy.

SEE ALSO: A Timeline Of The National Guard's Deployment To The US-Mexico Border Under Trump