Troops On The Southern Border May Not Be Armed

About 1,000 Marines from Camp Pendleton, California, will join the roughly 7,000 active-duty troops being deployed to the southern border,... 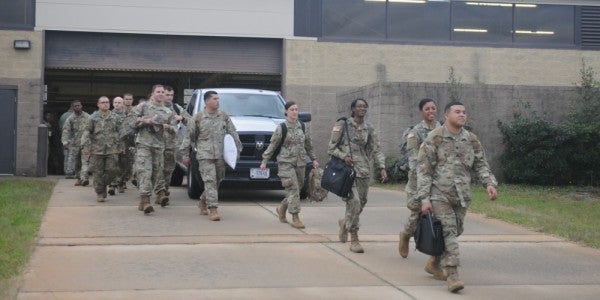 About 1,000 Marines from Camp Pendleton, California, will join the roughly 7,000 active-duty troops being deployed to the southern border, but it is unclear if any of those forces will be armed, defense officials told Task & Purpose on Friday.

Air Force Gen. Terrence O’Shaughnessy, head of NORTHCOM, has the authority to decide whether active-duty troops who are assigned with protecting classified information, guarding stored weapons, or serving in a force protection role, Kucharek explained to Task & Purpose.

As of Friday afternoon, O’Shaughnessy had not delegated to commanders the authority to arm those troops, Kucharek said.

All of the troops being dispatched to the U.S./Mexico border are tasked with helping civil authorities stop a caravan of Central American asylum seekers from crossing into the United States. NORTHCOM is expected to announce within 24 hours which new active-duty units will be part of the mission, including the Marine Air-Ground Task Force from Camp Pendleton, defense officials said. Breitbart's Kristina Wong first reported about the Marines’ deployment on Friday.

When President Bill Clinton sent Marines to the U.S./Mexico border in 1997 as part of an anti-narcotics operation, a corporal accidentally shot and killed an 18-year-old American goat herder, whom the Marine thought was firing at one of his comrades.

On Thursday, President Donald Trump told reporters that U.S. troops should treat any migrants who throw rocks at them as armed gunmen.

The comment was criticized by some former military leaders, including retired Gen. Martin Dempsey, the former Chairman of the Joint Chiefs. But on Friday, Trump argued that he never said U.S. troops should shoot migrants.

“We’re going to arrest those people quickly and for a long period of time,” the president said.