Former Joint Chiefs Chairman: Sending Troops To The Border Is ‘A Wasteful Deployment’

Although the former Chairman of the Joint Chiefs of Staff has been sub-tweeting the Trump administration in retirement for some... 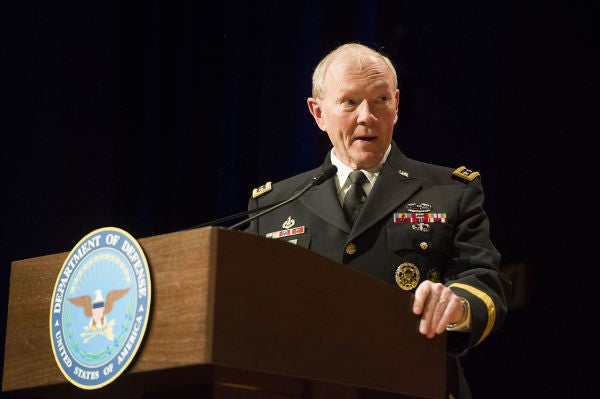 Although the former Chairman of the Joint Chiefs of Staff has been sub-tweeting the Trump administration in retirement for some time now, his tweet on Thursday was his most direct criticism yet.

Just a few hours after President Donald Trump said U.S. troops deployed to the border should treat rocks as if it were a rifle — the implication being, soldiers should immediately open fire at migrants if they throw rocks — Gen. Martin Dempsey (Ret.) posted this on Twitter:

Our men and women in uniform are better trained, better equipped, and better led so they meet any threat with confidence. A wasteful deployment of over-stretched Soldiers and Marines would be made much worse if they use force disproportional to the threat they face. They won’t.

Trump told reporters on Wednesday that up to 15,000 U.S. troops could ultimately be deployed to the border, in response to a caravan of approximately 7,000 Central American migrants slowly making its way through Mexico (U.S. Army planning documents assess only about 1,400 will likely make the entire journey, which should take them about 30 days).

Dempsey, who served as the 18th Chairman from 2011 to 2015 before passing the baton to the current Chairman, Marine Gen. Joseph Dunford, is not the only former general to speak out in recent days.

Retired Army Gen. Mark Hertling also posted a tweet in response to Trump's controversial change to the rules of engagement on Thursday:

FWIW, there is no leader in the military – Officer or NCO – who would allow a soldier to shoot at an individual throwing a rock. They know that violates the rules of engagement, the law of land warfare & the values those in the military believe. It would be an unlawful order.

A spokesman for Gen. Dunford declined to comment to Task & Purpose on Dempsey's tweet; Dempsey did not immediately respond to a request for comment from Task & Purpose.