Reports: Trump Will Nominate Army Gen. Mark Milley As Next Chairman Of The Joint Chiefs Of Staff

President Trump will announce on Saturday that he will nominate Army Chief of Staff Gen. Mark Milley to serve as... 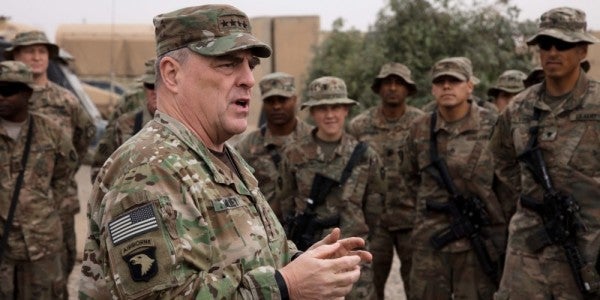 President Trump will announce on Saturday that he will nominate Army Chief of Staff Gen. Mark Milley to serve as the next chairman of the Joint Chiefs of Staff, according to media reports.

The New York Times first reported on Friday that Trump has picked Milley to replace Marine Gen. Joseph Dunford, whose tenure as chairman of the Joint Chiefs of Staff runs until Oct. 1.

It is unclear why the president would announce his intent to nominate Milley nearly 11 months before Dunford retires. As of Friday, all indications were that Dunford will serve the rest of his term.

Earlier on Friday, Trump told reporters that he intended to make a personnel announcement at Saturday’s Army-Navy Game in Philadelphia.

“I can give you a little hint: It will have to do with the Joint Chiefs of Staff and succession,” the president said.

Trump decided to nominate Milley instead of Air Force Chief of Staff Gen. David Goldfein, whom Defense Secretary James Mattis preferred to be the next Chairman of the Joint Chiefs of Staff, according to the Washington Post, which cited unnamed “individuals familiar with White House plans.”

Pentagon and White House officials went radio silent when Task & Purpose asked them if Milley would be the president’s nominee to replace Dunford. The Army officials referred questions to the White House, which declined to comment on Friday.

Milley became Army chief of staff in August 2015. He was commissioned after graduating from Princeton University in 1980 and went on to command several conventional and Special Forces units over the next three decades, according to his official biography.

In addition to his three Afghanistan deployments, he has also deployed to Iraq, Somalia, Colombia, Bosnia-Herzegovina, Haiti, Panama, and Egypt’s Sinai peninsula. One of his previous assignments was serving as Military Assistant to the Secretary of Defense.

During his tenure as Army chief of staff, Milley stressed the need for soldiers to be physically fit to withstand the demands of combat. That is why the service is adopting a new combat fitness test, which is both age- and gender-neutral for all soldiers, he said in October at the Association of the United States Army’s annual conference.

“Ground combat is unbelievable,” Milley said. “Go look at those kids, who are walking up and down the hills of Afghanistan. My dad at the beaches of Iwo Jima went 19 consecutive days without eating in some of the most brutal combat in military history. Combat is not for the faint of heart. It’s not for the weak-kneed.”

SEE ALSO: Reporter To Dunford: ‘2010 Called’ About Your Afghan Strategy