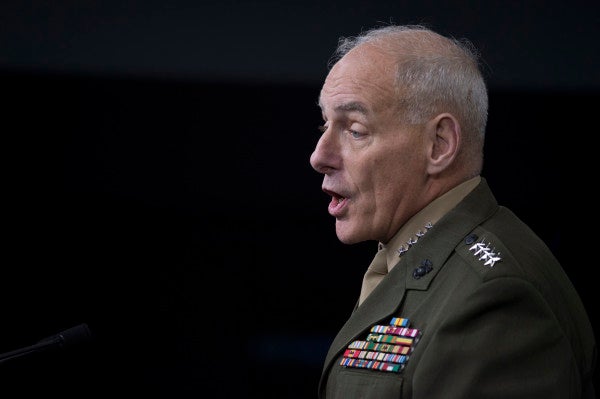 A Gold Star father, Kelly became chief of staff in July 2017 after initially serving as Trump’s Homeland Security Department secretary. The president reportedly brought Kelly in to bring order to the West Wing following the ineffective leadership of his former chief of staff, Reince Priebus.

The circumstances surrounding Kelly’s departure were not immediately clear. The president made a brief announcement to reporters before leaving for Saturday’s Army-Navy Game in Philadelphia.

Media reports have indicated the working relationship between Trump and Kelly has been strained in the best of times. Kelly has been photographed wincing or putting his head in his hands as Trump lambasted NATO allies or made other unscripted remarks. Kelly has denied being visibly upset as Trump spoke.

In October 2017, Kelly was one of the president’s strongest defenders after Rep. Frederica Wilson, a Democrat from Florida, accused Trump of insensitivity during a phone call with the widow of Army Sgt. La David Johnson, who was killed alongside three of his fellow soldiers in Niger earlier that month.

“It stuns me that a member of Congress would have listened in on that conversation,” said Kelly, whose son 1st Lt. Robert Kelly was killed in Afghanistan in November 2010. “I thought at least that was sacred.”

Kelly also said that when the president asked him how to talk to the families of the four soldiers killed in the Oct. 4, 2017 Niger ambush, Kelly passed along some advice he had received from Marine Gen. Joseph Dunford, now chairman of the Joint Chiefs of Staff.

“He said: ‘Kell, he was doing exactly what he wanted to do when he was killed. He knew what he was getting into by joining that 1 percent. He knew what the possibilities were, because we’re at war. When he died – and the four cases we’re talking about, Niger, and my son’s case in Afghanistan – when he died, he was surrounded by the best men on this earth, his friends.’”

SEE ALSO: The Twilight Of The Trump Generals