Trump: Troops On The Border Should Treat Migrant Rocks Like A Rifle

President Trump said troops deployed to the southern border should respond to any migrants throwing rocks at them as if... 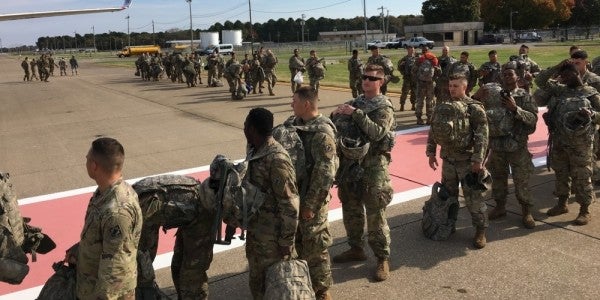 President Trump said troops deployed to the southern border should respond to any migrants throwing rocks at them as if they were being shot at, contradicting the rules of engagement they will be operating under.

The issue came up on Thursday when a reporter asked Trump if any of the troops being sent to the border might open fire on asylum seekers, who are fleeing Central America.

“I hope not,” the president replied. “It’s the military. I hope there won’t be that, but I will tell you this: Anybody throwing stones, rocks, like they did to Mexico – the Mexican military, Mexican police – where they badly hurt police and soldiers of Mexico, we will consider that a firearm – because there’s not much difference when you get hit in the face with a rock.”

“We will consider that the maximum that we can consider that, because they’re throwing rocks viciously and violently,” Trump said in response to another reporter. “You saw that three days ago – really hurting the military. We’re not going to put up with that. They want to throw rocks at our military, our military fights back. We’re going to consider it – I told them: Consider it a rifle. When they throw rocks like they did at the Mexico military and police, I said: Consider it a rifle.”

Asked if he envisions the US military firing at migrants at the border, President Trump says: "I hope not."

"I will tell you this, anybody throwing stones, rocks … we will consider that a firearm, because there's not much difference when you get hit in the face with a rock." pic.twitter.com/mnsc56EFT7

Trump has said up to 15,000 U.S. troops could ultimately deploy to the U.S./Mexico border to stop caravans of refugees, which he claimed had broken into Mexico by force. U.S. Northern Command has identified 7,000 active-duty troops for border security duty and another 2,000 National Guardsmen are already there.

U.S. military officials were unable to elaborate on the president’s comments. Army Lt. Col. Jamie Davis, a Pentagon spokesman, said he had no information about the rules of engagement U.S. troops on the border will follow; however, he pointed out that not all of the troops will be armed.

However, documents published by Newsweek from U.S. Army North show troops will be operating under the Standing Rules For The Use Of Force, which allows for troops to respond in self-defense in a proportional manner.

Air Force Capt. Lauren Hill, a spokeswoman for NORTHCOM, referred questions about the rules of engagement to the Pentagon.

“Our standard rules of force apply here,” Hill told Task & Purpose. “As with anything, deadly force is authorized in self-defense for those faced with an imminent threat of death or serious bodily harm.”

“Let me be clear here,” O'Shaughnessy replied. “The U.S. military personnel that are going have very clear guidance that we've given them: It's the standard rules for the use of force. It's similar to if we were going to any location within the United States, we have these rules in place for a reason.

“It allows us to have a very standardized set that applies to multiple situations. Our forces are trained to that. We are the most disciplined force in the world, from a military perspective. Secretary Mattis has made it very clear that we are able to train; we are able to ensure that every airman, soldier, sailor, and Marine going there fully understands the rules for the use of force.

“We are, in fact, as an example, setting up training programs that'll be all the way from a large scale mass training that will then go down to unit training. And then individual training where they'll go through vignettes and operational consideration, that they will have that level of understanding exactly what it is to be expected of them.

“Then in addition that, we're working with CBP [U.S. Customs and Border Protection] to have training venues that will work with CBP to ensure that we fully understand each other's rules for the use of force … to make sure that we are compatible in our operations, together.”