Mission Accomplished: Troops At US-Mexico Border Should Be Home By Christmas

It seems like only yesterday that 5,800 active-duty service members were racing to the Southwest border to stop a migrant... 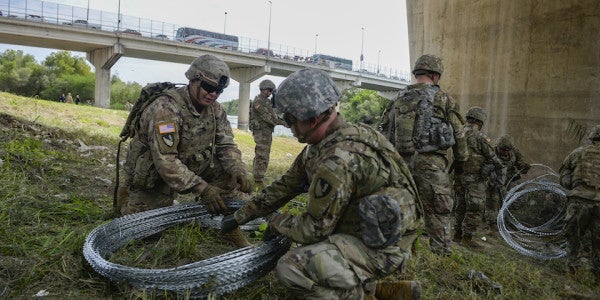 It seems like only yesterday that 5,800 active-duty service members were racing to the Southwest border to stop a migrant caravan from entering the United States, but it was actually about three weeks ago, right before the midterm elections.

Now, their mission presumably on the verge of being accomplished, the troops are finally coming home — and just in time for Christmas.

That's according to Army Lt. Gen. Jeffrey Buchanan, the commander of U.S. Army North, who is helming the operation from San Antonio, Texas. “Our end date right now is 15 December, and I've got no indications from anybody that we'll go beyond that,” Buchanan told Politico on Nov. 19.

San Antonio is a fitting locale for mission headquarters. In 1836, the city saw Mexican forces under the command of President General Antonio Lopez de Santa Anna lay waste to a ragtag outfit of Texians in the infamous Battle of the Alamo.

Fortunately, this time it didn't come to that. Instead, the invading force — approximately 7,000 refugees advancing by foot from the depths of Central America — opted for one of the oldest plays in the book: the switcharoo.

No sooner had the bulk of Buchanan's army arrived in Texas to bolster the Border Patrol agents and National Guard units holding the line along the Rio Grande Valley than the caravan changed course, swerving toward the California border.

Thousands of asylum-seekers have already started to arrive in Tijuana, prompting hundreds of locals to spill into the streets with chants of “Mexico first!” One 62-year-old protester told National Public Radio, “We want the caravan to go; they are invading us.”

Tijuana borders San Diego, where many of the refugees hope to go. However, of the 5,800 active duty soldiers and Marines currently deployed to the border, only 1,300 are in California. And based on Buchanan's comments, it seems they, too, may be preparing to decamp soon.

According to Politico, the general explained that “the troop deployment should start falling rapidly as engineer and logistics troops … wind down their mission of building base camps and fortifying ports of entry for the Border Patrol.”

Buchanan also clarified why the Pentagon had declined a request from the Department of Homeland Security to back up its personnel if shit went down at the border.

“That is a law enforcement task, and the secretary of defense does not have the authority to approve that inside the homeland,” he said.

U.S. Army North and the Office of the Secretary of Defense did not immediately respond to a request for comment.