US Troops Could Spend Christmas On The Southwest Border, Mattis Says

THE PENTAGON –If history has taught us anything, it’s that American wars are never over by Christmas. The same can... 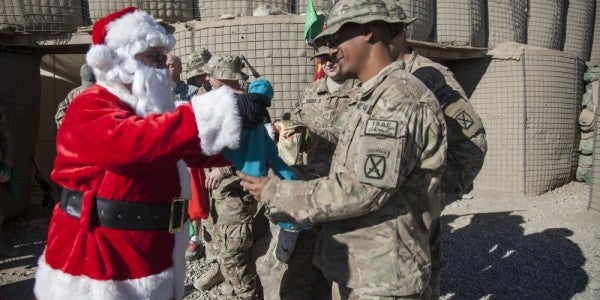 THE PENTAGON –If history has taught us anything, it’s that American wars are never over by Christmas. The same can be said for border support operations.

Currently, the active-duty mission is authorized until Dec. 15, but that deadline could be extended based on civil authorities’ needs, Mattis said at a Pentagon news briefing. The defense secretary’s comments come just two days after Lt. Gen. Jeffrey Buchanan, commander of U.S. Army North, told Politico that the he did not expect the border mission to last beyond mid-December.

“I know that one of the commanders of the troops spoke about most of the troops … being home by Christmas,” Mattis said on Wednesday. “Some of these troops certainly will be. I understand what he was saying.”

“This is one of the problems with trying to answer questions of reporters at a current point when something can change later,” he continued. “So some of those troops certainly will be home. I would anticipate they would be. But some troops may not be or some new troops may be assigned to new missions. This is a dynamic situation.”

SEE ALSO: Trump Says US Troops Are ‘Proud’ To Spend Thanksgiving Deployed To The Border