The money for the border wall comes from the Defense Department's counter-narcotics funds. 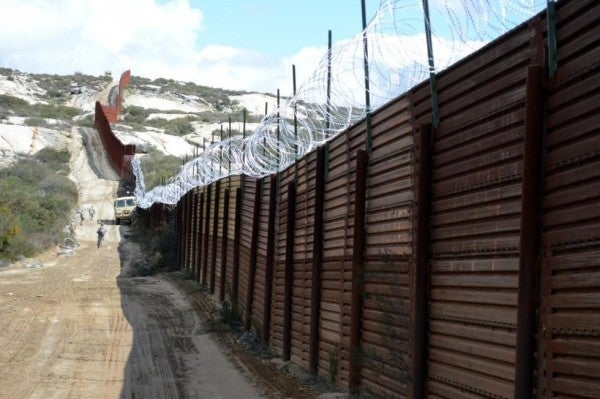 Despite the Pentagon already having received pushback from Congress about plans to help build the border wall, the Army announced two multi-million dollar contracts on Tuesday for border wall construction in New Mexico and Arizona.

The money for the border wall — $976 million, per Tuesday’s announcement — comes from the Defense Department’s counter-narcotics funds, a large part of which is made up of money that the Army did not spend for personnel costs because it failed to meet its recruiting goals, defense officials said.

Tuesday’s announcement comes after a heated exchange between the Pentagon and the Democrat-controlled House about whether the Defense Department has the right to transfer money for barriers along the border.

“These funds will be used to support request to build 57 miles of 18-foot-high pedestrian fencing, constructing and improving roads, and installing lighting within the Yuma and El Paso Sectors of the border,” the Defense Department announced at the time.

But the chairman of the House Armed Services Committee unsuccessfully tried to block the Pentagon from using the counternarcotics funds for the border wall.

“The committee denies this request,” Rep. Adam Smith (D-Wash.) wrote in a March 26 letter to David Norquist, who is performing the duties of deputy defense secretary. “The committee does not approve the proposed use of the Department of Defense funds to construct additional physical barriers and roads or install lighting in the vicinity of the United States border.”

However, Congress has given the Pentagon permission to transfer up to $4 billion from this year’s budget for purposes other than originally intended. That means the Defense Department was only required to notify Congress that it plans to use the $1 billion for the border wall, Pentagon spokesman Christopher Sherwood said on March 27.

The Army Corps of Engineers is expected to provide more information on the matter on Wednesday, according to spokeswoman Raini Brunson.

Per Tuesday’s announcement, SLSCO Ltd. out of Galveston, Texas, received a $789 million contract, and is expected to finish their portion of border wall construction in Santa Teresa, New Mexico, by October 1, 2020. Barnard Construction Co. Inc. in Bozeman, Montana, received $187 million, and will be building “primary pedestrian wall replacement” in Yuma, Arizona. The expected completion date is Sept. 30, 2020.

SEE NEXT: Pentagon to Congress: Here’s every project that could be used to fund Trump’s wall. Or not. We don’t even know