"As alleged, not only did they lie to donors, they schemed to hide their misappropriation of funds by creating sham invoices and accounts to launder donations and cover up their crimes, showing no regard for the law or the truth" 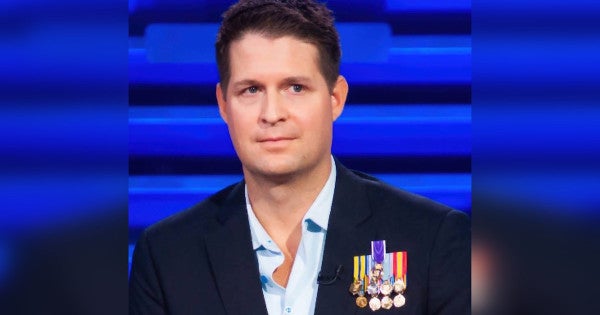 A wounded Iraq veteran who raised more than $25 million through GoFundMe for a privately built wall along the southwestern border has been arrested and indicted for fraud, the Justice Department announced on Thursday.

Brian Kolfage has been indicted along with Stephen Bannon, a former adviser to President Donald Trump, and two others, according to the U.S. Attorney’s Office for the Southern District of New York.

“As alleged, the defendants defrauded hundreds of thousands of donors, capitalizing on their interest in funding a border wall to raise millions of dollars, under the false pretense that all of that money would be spent on construction,” Audrey Strauss, the acting U.S. Attorney for the Southern District of New York, said in a news release.

Task & Purpose has reached out to Kolfage for comment.

Kolfage lost both legs and his right arm while serving with Air Force security forces in Iraq in 2004. He began a GoFundMe campaign in December 2018 to raise $1 billion, which he originally intended to give to the government so it could build the border wall.

But in February 2019, Kolfage announced that the donations would instead go to a non-profit organization that would build the wall itself, prompting GoFundMe to offer refunds to his contributors.

Kolfage then tried to do an end-run around GoFundMe by urging the contributors who had already sent money to transfer their donations to the new non-profit organization, We Build The Wall Inc.

As of May 2019, $14 million on donations was transferred to the non-profit group and $6 million was refunded, a GoFundMe spokesman told Task & Purpose at the time.

“While repeatedly assuring donors that Brian Kolfage, the founder and public face of We Build the Wall, would not be paid a cent, the defendants secretly schemed to pass hundreds of thousands of dollars to Kolfage, which he used to fund his lavish lifestyle,” Strauss said in Thursday’s news release.

In the indictment, federal prosecutors accuse Kolfage of lying when he allegedly assured donors that none of the money would go toward his salary, the Justice Department news release says.

In fact, Kolfage allegedly took more than $350,000 in donations for his personal use and Bannon allegedly received more than $1 million from We Build The Wall, of which he is accused of spending hundreds of thousands of dollars on personal expenses, the news release says.

The four people named in the indictment are also accused of taking illegal steps to conceal the payments to Kolfage, the news release says.

“As alleged, not only did they lie to donors, they schemed to hide their misappropriation of funds by creating sham invoices and accounts to launder donations and cover up their crimes, showing no regard for the law or the truth,” Inspector-in-Charge Philip R. Bartlett said in the news release. “This case should serve as a warning to other fraudsters that no one is above the law, not even a disabled war veteran or a millionaire political strategist.”

Dustin Stockton, former vice president of strategy and marketing for We Build the Wall, and Jennifer Lawrence, the group’s communications director, said in a statement that they were both served with subpoenas on Thursday to appear before a grand jury brought by the U.S. Attorney for the Southern District of New York

Federal agents also executed warrants for their cell phones and RV in Nevada, the two said in the statement.

“Jen and I have no comment on the specifics contained in the indictment and will only say that we intend to comply with the court’s order,” the statement says. “Jen and I would like to commend the officers who executed the warrant for their fair and reasonable treatment of us under the circumstance.”

Related: The Air Force vet who raised $22 million for a border wall claims a 'major network' will show his finances are legit