Brian Kolfage, who was severely wounded while serving in the Iraq, began accepting donations in December, but on Jan. 11 he announced that he would use the money raised to create an organization that would build the wall itself rather than giving it to the government. 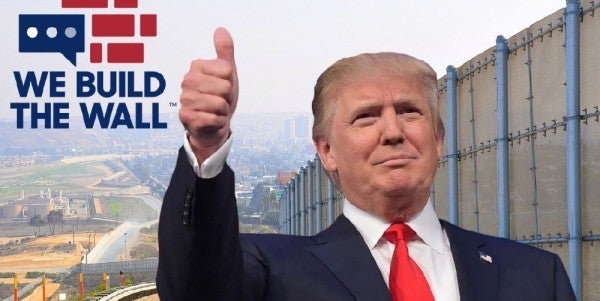 A triple-amputee Air Force veteran who raised more than $20 million toward building a wall on the U.S./Mexico border is trying to circumvent efforts by the fundraising site GoFundMe to return the donations to more than 325,000 donors.

Brian Kolfage, who was severely wounded while serving in the Iraq, began accepting donations in December, but on Jan. 11 he announced that he would use the money raised to create an organization that would build the wall itself rather than giving it to the government.

Once Kolfage changed the purpose of what the funds would be used for, GoFundMe announced that all donors would get a refund, unless they wanted their money to go toward a new organization. That is exactly what Kolfage wants people to do.

On his GoFundMe campaign page, which is still active, he is urging people who donated before Jan. 11 to “opt in” by clicking a link that sends the following message to GoFundMe:

“By submitting this request, I am confirming that I would like my donation(s) to go to WeBuildTheWall Inc., the new 501(c)(4) organization created to manage the money raised on Brian Kolfage's campaign: https://www.gofundme.com/TheTrumpWall.”

Brian Kolfage was wounded in Iraq in 2004 while serving with the Air Force.Courtesy of Facebook.

Kolfage reportedly has a history of pushing conspiracy theories and other fake news on Facebook for money. When he spoke to Breitbart News radio on Jan. 12, Kolfage encouraged people to opt in by claiming the “liberal media” was trying to scare people into believing that all the money raised for the original purpose of funding the border wall would be returned to donors.

“The fake news is saying that the money can't go to the wall,” he said. “The money is all being refunded – it's done; it's over. They're trying to discourage everybody. But that's not the case at all. We're still raising money on that GoFundMe. That GoFundMe has not stopped. It's still picking up. We raised almost $200,000 since the announcement.”

However, a spokesman for GoFundMe told Task & Purpose that nothing had changed since the company announced all donors would get their money back.

“All donors have been contacted by GoFundMe via email and they can also find the donor form directly on the campaign page.”

Dustin Stockton, vice president of strategy and marketing for the “We Build The Wall” campaign, said Kolfage is not trying to do an end run around GoFundMe's decision to refund the $20 million.

The campaign has been negotiating with GoFundMe to communicate with people who donated before Jan. 11 on how they can repurpose their contributions toward the new organization that will build the wall, Stockton told Task & Purpose.

“We have worked closely with GoFundMe for weeks,” Stockton said. “We remain in good standing with GoFundMe. We're still actively taking contributions with GoFundMe on the page that are not subject to the opt-in process.”