This isn't really new wall construction at all, and certainly not "the wall" that Trump has been haggling with Congress over. 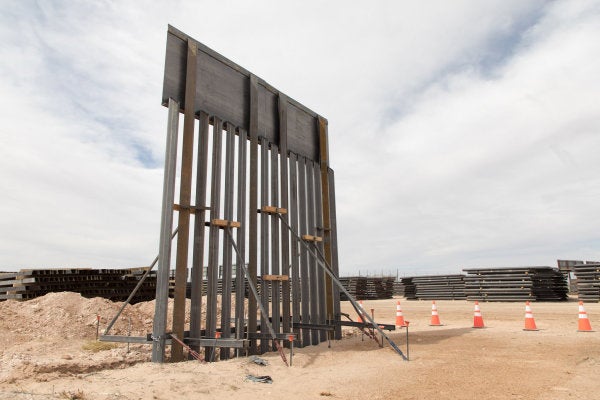 With a legal fight challenge mounting from state governments over the Trump administration's use of a national emergency to construct at the U.S.-Mexico border, the president has kicked his push for the barrier into high gear.

On Wednesday, President Trump tweeted a time-lapse video of wall construction in New Mexico; the next day, he proclaimed that “THE WALL IS UNDER CONSTRUCTION RIGHT NOW”

THE WALL IS UNDER CONSTRUCTION RIGHT NOW! https://t.co/exUJCiITsz

But there's a big problem: The footage, which was filmed more than five months ago on Sep. 18, 2018, isn't really new wall construction at all, and certainly not part of the ongoing construction of “the wall” that Trump has been haggling with Congress over.

“It's a replacement project,” Mike Petersen, public affairs director for the Army Corps of Engineers' South Pacific Division, told Task & Purpose. “I was in the division 12 years ago and we were doing border wall replacement work back then.”

Trump did get some details right: Construction began April 9, 2018, and ended on January 30, well ahead of the estimated 390 days Customs and Border Patrol anticipated when construction first began last year.

But even though the $73.3 million project was initiated under Executive Order 13767 on border security that Trump signed almost immediately after taking office in January 2017, the USACE Santa Theresa footage does not show ongoing construction, USACE officials said.

“The fence segment was constructed and funded under the authorities of DHS/CBP with the U.S. Army Corps of Engineers providing contracting/oversight for the construction through our interagency support mission,” USACE HQ spokeswoman Raini Brunson told Task & Purpose. “The video, which was filmed in Sept. 2018, has the USACE logo on it because it was produced by USACE.”

The Army Corps of Engineers has overseen CBP wall replacement projects including some 124 miles of replacement barriers authorized since Trump took office. As of January, a New York Times analysis indicated that not a single mile of new border wall has been erected along the U.S.-Mexico border wall.

But the way Trump presented the footage on Twitter rankled officials within USACE given that the work shown essentially constituted pre-approved repair work, a separate source told Task & Purpose on condition of anonymity, indicating that the president was passing off maintenance as new wall construction.

The Army Corps of Engineers could not immediately confirm where the request for the footage originated, and how exactly it ended up on the president's Twitter feed.

SEE ALSO: Trump: $6.1 Billion In Pentagon Money Going To Border Wall Wasn't For Anything That Seemed 'Too Important To Me'

WATCH NEXT: A Border Wall Time-Lapse