In a scene torn straight from Mark Twain's ​The Adventures Of Tom Sawyer​, U.S. military personnel deployed to the U.S.-Mexico border will spend the next month painting a mile-long section of border fence to enhance its "aesthetic appearance" 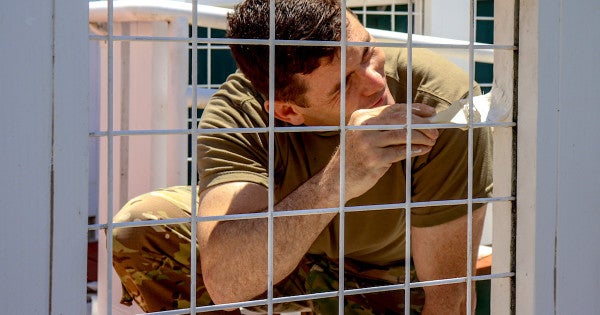 In a scene torn straight from Mark Twain's The Adventures Of Tom Sawyer, U.S. military personnel deployed to the U.S.-Mexico border will spend the next month painting a mile-long section of border fence to enhance its “aesthetic appearance.”

According to a Department of Homeland Security email sent to lawmakers and obtained by CBS News on Wednesday, the 30-day project's main purpose is to “improve the aesthetic appearance of the wall,” although “there may also be an operational benefit based on our experience with painted barrier in Nogales, Arizona.”

The news comes weeks after a U.S. government lawyer disclosed in a court filling that U.S. Customs and Border Patrol personnel had only managed to erect 1.7 miles of fencing along the U.S.-Mexico with the $1.57 billion Congress authorized out for construction in 2018.

DHS informed Congress today that troops are going to spend the next month painting the border wall & “the primary purpose is to improve the aesthetic appearance.” A disgraceful misuse of taxpayer $$. Our military has more important work to do than making Trump’s wall beautiful.

Rep. Joaquin Castro (D-Tex.) put it a little more succinctly in a statement to CBS News: “These are soldiers, they are not painters.”

Well, sort of: the Pentagon takes the responsibility of a proper paint job for major assets very seriously for various operational reasons. Just consider the Navy's detailed cleaning and painting requirements for naval vessels, which, as a critical part of warships' defense against rust and corrosion, everyone knows sailors take seriously — right?

Whatever unspecified “operational benefit” painting the border fence may provide, it seems likely that the average enlisted soldier or Marine will perceive the assignment as the busywork and shit-shoveling that U.S. service members have been relishing for more than a year — especially when Mexico was supposed to pay for all of this.

That's what makes the new DHS directive such a delicious slice of Americana. Recall that in The Adventures of Tom Sawyer, Aunt Polly orders the titular rascal to whitewash a picket fence as punishment, only for Sawyer to enlist his neighborhood friends to pay him for the pleasure of doing it. It's exploitation passed off through a silver-tongued con job as honest, meaningful work.

Then again: Welcome to the daily bullshit of the U.S. military. We hope you survive the experience!