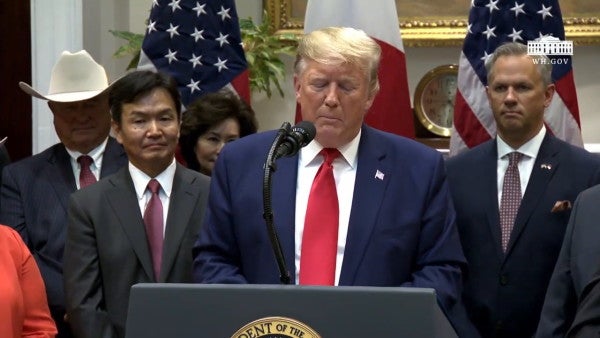 Lost amid the firestorm that follow President Donald Trump's surprise announcement that the U.S. would withdraw troops from northern Syria was a surprise moment of candor from the increasingly-embattled commander-in-chief: that signing letters to the families of fallen service members has hardened his determination to finally end the “forever wars.”

Speaking to reporters after signing a pair of trade agreements alongside Japanese Prime Minister Shinzo Abe, Trump faced a barrage of questions from reporters regarding his administration's decision to effectively abandon the Syrian Kurds who fought and died alongside U.S. troops against the ISIS caliphate to the whims of Turkish President Recep Tayyip Erdoğan.

The president is known for making bellicose threats, such as vowing to bring “fire and fury” to North Korea before he changed course and tried to woo Kim Jong Un into making a deal on his country's nuclear and missile program. But Trump has also been far less willing than his predecessors to send U.S. troops into harm's way. He has repeatedly said that the invasion of Iraq was a mistake and he has described Syria as a land of “sand and death.”

After a brief segue on how the Pentagon is refocusing its attention towards China and Russia as part of its new doctrine of “great power competition,” Trump offered another unusually direct assessment: it's time to “come back home.”

The president has long pledged to end the U.S. military's commitment to the Middle East and Afghanistan. In his mind, the post 9/11 wars have not been worth the treasure and blood. When he initially announced in December that he had decided to withdraw all U.S. troops from Syria, he made a point of how each service member's death weighs on him.

“I get very saddened when I have to write letters or call parents or wives or husbands of soldiers who have been killed fighting for our country,” Trump said in a video posted on Twitter. “It's a great honor; we cherish them; but it's heart-breaking.”