"He helped me form an opinion. He gave me a lot of information – and he has ever since." 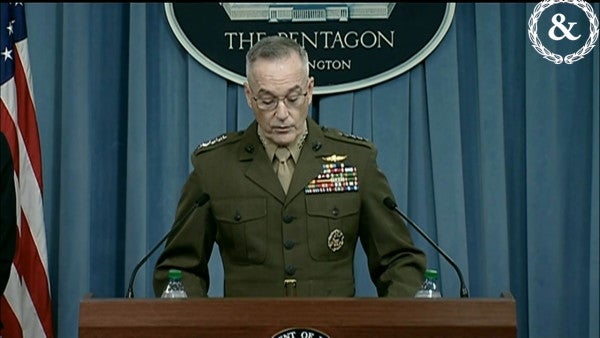 President Donald Trump revealed on Monday that Marine Gen. Joseph Dunford helped him decide to run for president in 2015.

The president's affinity for the military was on full display as he spoke at Fort Meyer, Virginia, after Dunford officially swore in Army Gen. Mark Milley as the 20th chairman of the Joint Chiefs of Staff.

“Mark, I want to congratulate you,” Trump said. “You're my friend. You're my advisor and you deserve this position. I never had a doubt.”

Trump also heaped praise on Dunford, whom he described as “one of America's most admired and beloved leaders.” When the president noted that Dunford had been promoted to a three-star general before formally receiving his second star, Trump quipped, “How do you do that, Joe?”

Then the president mentioned that Dunford had helped him even before he became president – a fact that only Trump, Dunford and his wife Ellyn know. Trump said he first met Dunford before he had made up his mind whether to run for president the following year.

The Marine general made quite the impression on the future president. Here is how Trump recalls what happened:

“In – I would say, 2015— I sat with Joe at a dinner; and believe it or not, I was getting a big award from the Marines. Joe was presenting the awards and I had not even thought of running for president. I said to my wife and family: 'Look at that guy. He's a great looking guy, isn't he? It's like central casting. He's like right out of Hollywood.'

“But he made the great presentation that night and I got to talk to him because I sat with him and Ellyn and his son Patrick. I was asking Joe lots of questions about the military. He said, 'You really enjoy this, don't you?' I said: Well, I just love our country. It's very important to me. I love our country.

“And I said: I don't know. What do you think? Should I give it a shot? This was before it was public. He was one of the first people I asked. I said: What do you think? Do you think I'd have a shot? If I get it, we're going to rebuild that military. It's going to be stronger than ever before.