"Thank you so much for your guidance as I took 130 soldiers over. I brought them back and I'm so honored to have served under your administration and your leadership, and I hope and pray that you will be our next president of the United States" 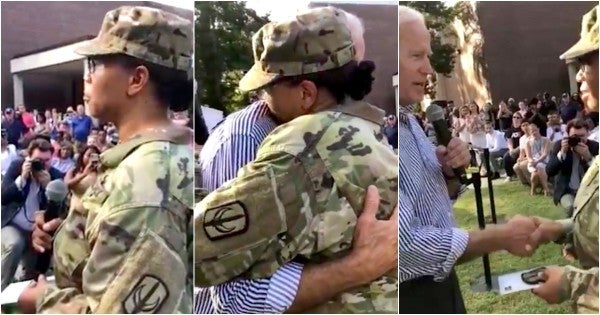 A major with the South Carolina Army National Guard has highlighted military's struggle to remain apolitical in an intensely partisan environment by telling former Vice President Joe Biden that she is praying that he wins the 2020 presidential election.

Maj. Ginger Tate, assigned to the 228th Theater Tactical Signal Brigade headquartered in Spartanburg, South Carolina, attended a nearby Biden rally while wearing her Army uniform on Wednesday, telling Biden that she waited six years to present either him or former President Barack Obama with a challenge coin that she and her first sergeant had possessed since their Afghanistan deployment.

“When I saw on the news last night that you were coming, I just had to be here,” Tate said in a video tweeted by CBS News reporter Bo Erickson. “Thank you so much for your guidance as I took 130 soldiers over. I brought them back and I'm so honored to have served under your administration and your leadership, and I hope and pray that you will be our next president of the United States.”

WOW: Major Ginger Tate led 130 troops in Afghanistan and just told @JoeBiden she has been waiting 6 yrs to give him this coin. "I hope and pray that you will be our next president." [Credit: Iris Earls] @CBSNews via @LacraiMitchell pic.twitter.com/gZ4Jaku1DI

U.S. service members are prohibited from attending partisan rallies while in uniform and making statements endorsing political candidates that could be construed as the Defense Department's official position.

“The South Carolina National Guard follows the Department of Defense guidance for military personnel that states service members are not to engage in political activities that imply or appear to imply sponsorship, approval, or endorsement of a political candidate, while in uniform,” Capt. Jessica Donnelly, a spokeswoman for the South Carolina National Guard, said on Thursday.

Donnelly was unable to say whether Tate could be disciplined as a result of her comments to Biden at Wednesday's campaign rally.

“Her chain of command and leadership are aware of the incident; however, due to The Privacy Act's protection of the records of individuals, the South Carolina National Guard is not able to release the specific personnel actions that are being taken,” Donnelly said.

At a Pentagon news conference on Wednesday, CNN reporter Barbara Starr had asked if partisanship was seeping into the military, as evidenced by active-duty troops brining red “Make America Great Again” hats to events where President Donald Trump speaks, such as his December visit to U.S. troops in Iraq and his January speech at the Pentagon.

The Navy had previously looked into whether sailors strayed into partisan territory by wearing patches with the words “Make Aircrews Great Again” during President Donald Trump's visit to Japan in May.

Defense Secretary Mark Esper on Wednesday stressed his commitment to keep the U.S. military out of the political fray.

“I believe the best way to do that begins with the chairman and I behaving in an apolitical way,” Esper said. And from there, the leadership that we demonstrate, the values we emulate, work their way throughout the force, and to me, that's the best way to do it.

“And, of course, we have rules and regulations throughout the services that say you can't wear political items on a uniform, et cetera, et cetera, and we will continue to enforce those standards.”

“It has been a very politically turbulent period of time,” Dunford said at Wednesday's news conference. “And yet almost 80 percent of the American people still have trust in the United States military as an institution. And we take that very seriously, to maintain that trust.”