To save space, the Army is making burial at Arlington Cemetery more restrictive

"The hard reality is we are running out of space." 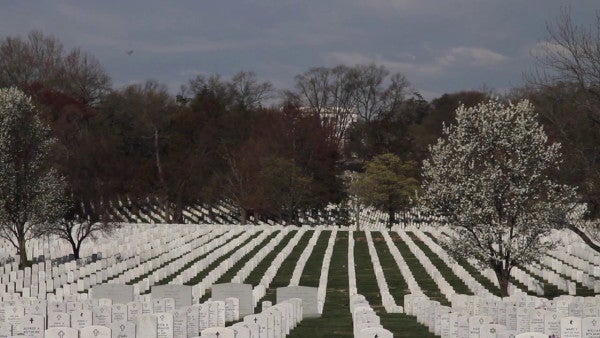 In order to stay ahead of shrinking burial space, the Army is proposing new criteria to decide who is and is not eligible to be buried at Arlington National Cemetery, the service announced on Wednesday.

Under current criteria, “early all of the 22 million living armed forces members and veterans are eligible for less than 95,000 remaining burial spaces.” Without changes, the Army says the cemetery will hit capacity by the 2050s.

The Fiscal Year 2019 National Defense Authorization Act directed the Army Secretary to come up with “revised eligibility criteria” in order to keep the cemetery functioning, the Army press release said.

The current plan is to preserve 1,000 remaining gravesites for current and future Medal of Honor recipients, and add 37 acres in a planned expansion project.

The new criteria, according to the Army, proposes that below-ground interments be restricted to those who are killed in action, including repatriated remains of troops; recipients of the Silver Star and above who served in combat; Purple Heart recipients; those who were killed in combat-related incidents “while conducting uniquely military activities;” former prisoners of war; U.S. presidents and vice presidents; and veterans with combat services who served as civilian government officials and “made significant contributions to the nation's security.”

Above-ground interment currently is available for “most veterans, who have at least one day of active service (other than for training) and an honorable discharge,” according to the Arlington Cemetery.

New criteria for above-ground interments, however, would extend only to World War II-era veterans, including legislated active duty designees; armed forces retirees eligible to receive retired pay but not eligible for interment; combat veterans who served a minimum of two years; and veterans with no combat service who served as civilian government officials and contributed to national security “at the highest levels of public service.”

The implementation of the new criteria will not interfere with burials that were previously scheduled, nor will it interfere with the veterans' burial benefits or veteran eligibility at the VA's national cemeteries, and state veterans cemeteries.

The criteria isn't yet final. The Army will offer a period of public comment and review before publishing the final rule, according to the press release.