A D-Day veteran faced an unattended burial. 500 strangers showed up to honor his service

D-Day veteran James McCue died a hero. About 500 strangers made sure of it 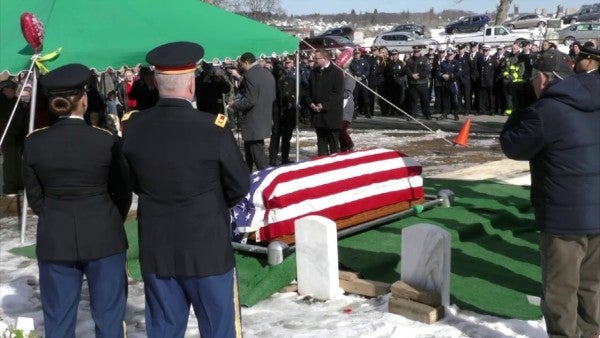 D-Day veteran James McCue died a hero. About 500 strangers made sure of it.

“It's beautiful,” Army Sgt. Pete Rooney said of the crowd that gathered in the cold and stood on the snow Thursday during McCue's burial. “I wish it happened for every veteran's funeral.”

Rooney, who lost his legs when a roadside bomb exploded in Iraq in 2007, wheeled himself over and placed one hand on the casket and gave McCue a final salute. He was among the crowd of people who came to Bellevue Cemetery in Lawrence to honor a man they had never met.

Earlier this week, cemetery staff wasn't sure if anyone was going to show up at McCue's funeral because they didn't know of any living relatives. McCue was 97 years old when he died last week at a health care center in Methuen.

But local veterans went to work, inviting people to attend the funeral on social media. People from near and far, young and old, showed up at the cemetery, where McCue was laid to rest with full military honors.

Deirdre Duemling, who retired from the Army after 22 years of service, said it broke her heart to think of McCue being buried all by himself. “Nobody should die alone,” Duemling said, “but never mind a World War II veteran.”

When Duemling saw the big crowd, she began to cry.

“I was so happy for this man,” Duemling said. “It touches my heart so much. He's in God's Army right now.”

McCue did have a close friend there. Doris Sevigny, 91, had known McCue for nearly three decades. They were neighbors who ate dinner and played bingo together, and Sevigny moved into McCue's nursing home three weeks ago.

Sevigny was given the folded flag draped over McCue's casket and a few of the spent shells from the rifle salute. Sevigny said McCue was a good man and she called the turnout “wonderful.”

“He would do anything for anybody. He always had a smile and he was always joking,” said Sevigny's niece, Diane Brown, who said the outpouring of support was overwhelming. “You can tell there's a lot of love in today's world.”