He's already ordered the concrete vault he plans to be buried in. 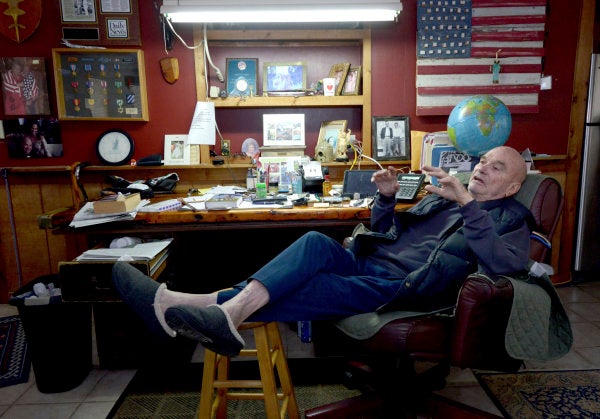 Jim Tucker, an 85-year-old Army veteran in Florida, doesn't care much about the details of his eventual funeral, except for one: He wants to be buried on his boat, damnit.

Tucker has lived on the concrete-hulled boat for decades, and it's where he feels safest after a tough 22-year Army career, The Daytona Beach News-Journal reported.

Tucker, who was inducted into the Army Ranger Hall of Fame in 2016, told The Daytona Beach News-Journal that there's “no law against my spending eternity in the bottom of my boat.” His plan is to be placed in a body bag in a sealed concrete vault, which he's already purchased and had delivered.

After graduating from The Citadel, Tucker became an Army Ranger and served in Korea, the Northwest Florida Daily News reported. He then worked as an instructor at Mountain Ranger Camp in Dahlonega, Georgia, where he received the Soldier's Medal for rescuing soldiers after a helicopter crash.

After serving for a time in France, Tucker briefly served as an ROTC instructor in Tennessee, before volunteering in 1967 to go to Vietnam where he earned two Purple Hearts, according to the Northwest Florida Daily News, which described him as “passionate, ornery, sentimental, loyal, profane, energetic, and far more literate and intelligent than he lets on.”

He's also extremely open about his expectations for the afterlife, though he doesn't worry about it much: “If there is a hell, I'll be in it.”

Still, Tucker is optimistic he still has plenty of time left. He told the Daytona Beach News-Journal that his last visit to the doctor put his health “within normal range.” And besides, he has a birthday party to plan — the boat, which was originally built as an Army transport ship in 1921, turns 100 in just two years. He plans to pass ownership of the boat to his daughter after his passing.

“I have been one lucky son of a bitch,” Tucker said, per the Daytona Beach News-Journal. “I have never enjoyed life more than I enjoy life right now.”