In the small world that is the Air Force, events that happen around the globe often have a local connection.... 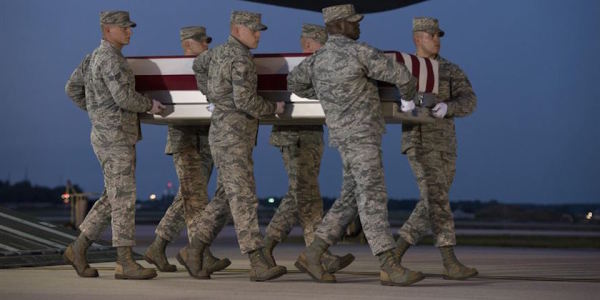 In the small world that is the Air Force, events that happen around the globe often have a local connection.

Such is the case with the story of the late Maj. Troy Gilbert, an F-16 fighter pilot who was killed in combat in Iraq in 2006. Earlier this week, American forces brought Gilbert’s remains home to Dover Air Force Base in Delaware, where his family stood by in silent tribute as his flag-draped casket was unloaded from the military aircraft.

From 2009 to 2011, Gilbert’s widow, Ginger, and his five children lived in Northwest Florida while Ginger’s second husband, Col. Jim Ravella, served as the commander of the 33rd Operations Group at Eglin Air Force Base.

Maj. Troy Gilbert, an F-16 Fighting Falcon pilot, was killed Nov. 27, 2006, in an F-16 crash 30 miles southwest of Balad Air Base, Iraq. Gilbert was the standardization and evaluation chief for the 332nd Expeditionary Operations Group and was deployed from the 309th Fighter Squadron from Luke Air Force Base, Ariz.U.S. Air Force photo.

“I met Ginger in 2009 when she and her new husband, Jim, were stationed here,” said Beach Community Bank President and CEO Tony Hughes, who serves on the Air Force Chief of Staff’s Civic Leaders Program. “I did not have the chance to meet Troy, but I knew all about his story and how he died a hero, literally saving many American lives against a numerically superior force.”

Related: Medal Of Honor Recipient’s Remains To Be Returned Home, Laid To Rest »

The long road to Gilbert’s homecoming began Nov. 27, 2006. According to a report from the Secretary of the Air Force's Public Affairs Office, Gilbert, who had deployed to Iraq with the 332nd Air Expeditionary Wing at Balad Air Base, got a call that an American helicopter had been shot down near Taji. The helicopter crew and coalition forces who were supporting them were outnumbered by enemy insurgents armed with rocket-propelled grenades, machine guns mounted on trucks, mortars and small arms.

Although they were low on fuel, Gilbert, whose call sign was “Trojan,” and his wingman headed toward the fight. Flying in at low altitude, Gilbert used his Gatling gun to strafe the enemy forces, destroying one of their trucks and forcing others to flee.

On his second low-altitude pass, Gilbert crashed while continuing to fire upon the enemy. He is credited with saving the lives of the helicopter crew and the coalition forces supporting them.

Insurgents in the area pulled the pilot’s body from the crash scene before U.S. forces could reach him. Although a small amount of his remains were ultimately recovered from the aircraft and buried at Arlington National Cemetery, Gilbert’s family had to live with the knowledge that most of his body remained in Iraq. To make matters worse, Al Qaeda forces used his body in propaganda videos.

During the years that followed, his widow never gave up hope that Gilbert’s body might one day be recovered. For a short period following the official end of the Iraq War in 2011, however, it looked like efforts to look for him might end. Because the small amount of remains had been recovered, Gilbert was officially listed as killed in action rather than missing.

She rallied friends and supporters to contact lawmakers and anyone else who would listen about her late husband’s case. As a result, the Pentagon announced in February 2012 that it would make a policy exception and would continue to search for Gilbert’s remains.

Four years later, on Aug. 28, an Iraqi tribal leader contacted one of the U.S. Special Operations forces serving in the country as an adviser. The man said his tribe had Gilbert’s remains and turned over evidence supporting his claim.

On Sept. 7, the Armed Forces Medical Examiner System confirmed the evidence was legitimate, and the military began the process of claiming Gilbert’s remains.

Hughes said he thought local residents who remembered Ginger would like to know the ending to the decade-long story.

“I am so happy for Ginger that Troy is back in the country he gave his life to defend,” Hughes said. “And I am so proud of our military, particularly our Air Force and the Special Operations troops who found Troy’s remains after all these years. We never leave an airman behind.”