The Air Force now has a golden F-16

The shiny Iowa Air National Guard F-16 is a throwback to the original 1996 gold F-16 and the 'bulldog' commander who created it. 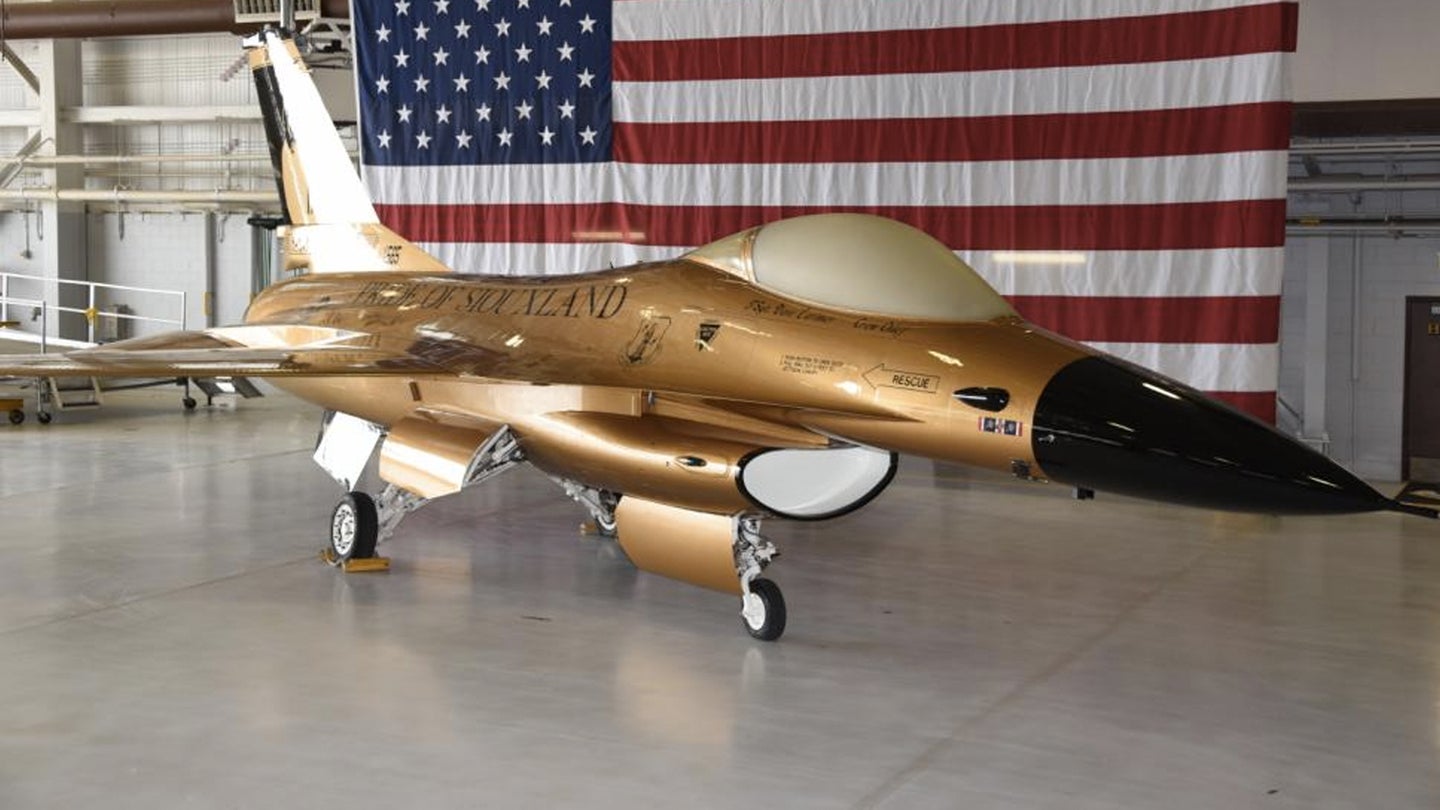 When Air Force Col. John Boyd, the father of the F-16 fighter jet, first envisioned the aircraft in the late 1960s and early 1970s, he wanted to avoid making it ‘gold-plated’ with needless features added on by Air Force staff that would add weight and decrease its maneuverability in a dogfight. Well, he might be rolling over in his grave right now, because the Air Force went ahead and painted one of his babies gold anyway.

This week, the Iowa Air National Guard revealed a shiny gold-painted F-16 in its hangar, which is itself a throwback to when the Iowa Air Guard first painted an F-16 gold during its 50th anniversary in 1996. At the time, painting a military aircraft anything other than standard gray was a rare feat.

“Veteran 185th [Fighter Wing] members say that other than the Thunderbirds, painting an entire U.S. Air Force jet was ‘not done’ 25 years ago,” wrote Senior Master Sgt. Vincent De Groot in a press release about the jet on Friday.

But like Col. John Boyd coming up with the F-16 in the first place, it took a maverick officer to paint it gold. That officer was 185th Fighter Wing commander Col. Dennis Swanstrom, a Nebraska farm boy who flew with the 185th Tactical Fighter Group since 1966 and became the unit’s commander in 1987.

“He had the respect of the community because of his care for the unit,” Iowa Air National Guard Brig. Gen. Larry Christensen said in a 2021 obituary for Swanstrom, who died on January 30 that year at the age of 78.

In 1991, a few short years after Swanstrom took the helm, the 185th Tactical Fighter Group adopted the F-16. The commander had a background in marketing, which made him a “consummate promoter,” and came in handy with making a special mark on the unit’s new jet.

“At the time each 185th F-16 was embossed with unique nose art, Swanstrom’s jet had a cartoon depiction of a spike collared bulldog wearing a Colonel’s cap with the words, ‘THE BIG BOSS’ in all caps,” De Groot wrote in the obituary.

The flashiness took new heights in 1996, which marked the unit’s 50th anniversary and the 30th year of Swanstrom’s service in the Air Force. The story goes that the colonel’s request to paint an F-16 gold was denied by service higher-ups, but he went ahead and “bulldogged” it anyway, figuring that he could change it back to gray quickly if he needed to. As a special touch, the aircraft also had 50th anniversary markings and the words “Pride of Siouxland” written across the fuselage.

“That’s exactly the kind of guy he was,” said Christensen, about Swanstrom’s penchant for ‘bulldogging’ a project that he thought needed doing. De Groot wrote in the obituary that the colonel’s goal “was to remind people of the proud history of the organization which he had been a part of for 30 years.”

“When the gold jet made its debut it was the biggest thing to reverberate across the fighter jet community since the death of Lt. j.g. Nick “Goose” Bradshaw,” De Groot wrote in 2022.

In 1998, two years after the gold jet’s debut, the rapper Master P released a music video for his Platinum single ‘Make ‘Em Say Uhh!’ where a gold tank is shown driving onto a basketball court. Coincidence? I think not. But regardless, Christensen said Swanstrom had a talent for getting people excited about coming to work and getting stuff done.

“If you can motivate people it makes your job as a commander much easier,” the general said. “He did that with great vigor, he was a great leader.”

Now, 26 years after the original gold paint scheme and a year after Swanstrom’s death, the 185th, which is now an aerial refueling wing, decided to give the golden Viper another go. This new jet is an F-16A that the Iowa Air Guard had on static display in front of one of its buildings in Sioux City. Wing members towed the jet across the runway to the paint facility. Just like the original, this 2022 version has a gothic-style bat painted on its tail. The bat is a callback to the wing’s performance in Vietnam, where its pilots often flew night missions and where wing members received 12 Silver Stars, 35 Distinguished Flying Crosses, 30 Bronze Stars and hundreds of other decorations over the course of thousands of combat sorties.

The paint scheme also features the words ‘Sioux City,’ and an elongated Native American headdress which, according to the wing’s history, “is symbolic of the brave Indian warriors, like War Eagle [a Yankton Sioux leader who actually did everything he could to avoid bloodshed] who once lived in the Siouxland area. The pride, courage and determination found in these ‘First Americans’ are traits emulated by the members of the 185th.”

Col. Swanstrom’s influence remains, with his name painted beneath the canopy, along with that of Tech Sgt. Dave Larimer, the jet’s crew chief back in 1996. Unlike the 1996 version, this new gold bird won’t fly. But it does lift all of our spirits, and it also happens to coincide with the Air Force’s 75th birthday this September.

“The gold jet is a celebration of every airmen, past and present who have served proudly in the United States Air Force from its beginning through its 75th year,” De Groot wrote in the press release.