The existence of the improbable dogfight remained under wraps for decades, yet the details of what happened are the stuff of legends. 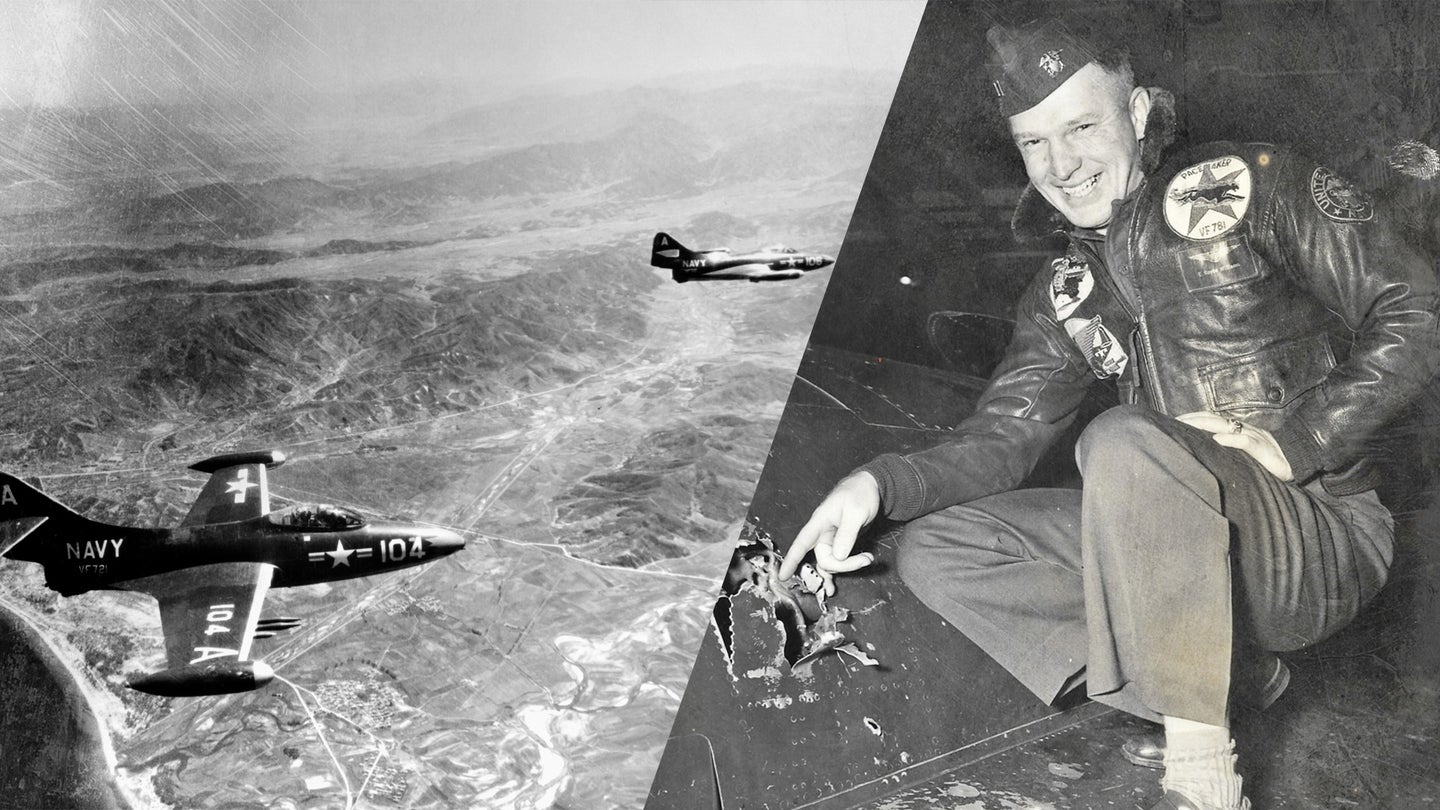 On Nov. 18, 1952, during the Korean War, Navy Lt. Royce Williams, along with three other pilots from his fighter squadron, VF-781, launched from the USS Oriskany into the stormy skies over the Sea of Japan. There were more than 250,000 sorties flown by the Navy during the conflict, but the ensuing engagement would end in one of the great feats of aerial combat, even if it was covered up for decades due to the tense political environment of the Cold War.

On this mission, Williams squared off against seven pilots from the Soviet Air Force, flying one of the most advanced jet fighters of the time, and walked away with three confirmed kills and one probable that was later confirmed. While Williams kept the incident under wraps at the behest of the Navy, there is now an effort underway to see him awarded the Medal of Honor for his actions that day. And while Top Gun: Maverick is in the news these days for breaking box office records, this is the actual story of one real-life Maverick and a dogfight that would seem improbable if it hadn’t actually happened.

The Oriskany was part of Navy Task Force 77, striking at logistics centers in North Korea. The target that day was the city of Hoeryong, right along the Yalu River where the borders of China, North Korea, and what was then the Soviet Union met. That made the bombing missions a risky proposition, given the possibility of violating each nation’s airspace.

Williams, on his second mission of the day, was flying as part of the combat air patrol in a Grumman F9F-5 Panther.

“We started to rendezvous with each other as we climbed out of the clouds,” Williams recalled in an interview with Task & Purpose, “And that’s when we heard from the combat information center that there were inbound bogeys from the north.”

Pulling above the clouds at more than 12,000 feet, Williams spotted seven contrails high in the sky above him. They were MiG-15s.

Comparable to the U.S. Air Force F-86, the MiGs outclassed Williams’ Panther in speed, maneuverability, climb rate, and the weapons range. While the Navy had scored some early kills against the MiGs, their mission had switched to one of mostly ground attack. Williams had been training as a Navy fighter pilot since 1944, but the primary mission of the Panthers in Korea was air-to-ground engagements.

The aerial combat was generally confined to the western half of the Korean peninsula, where the Air Force’s F-86 Sabres would patrol the approaches from China known as “MiG Alley.” This was one indication that let Williams know the planes he was facing were almost certainly launched from the Soviet Union.

Williams fired a quick burst to test his guns, but at the same moment, his flight leader reported a warning light flashing for his fuel pump and headed back toward the fleet. Before the engagement began, it was down to seven MiGs vs. two Navy Panthers.

As Williams and his wingman climbed past 26,000 feet, the MiGs split into two formations, with four of them diving and firing towards the Navy jets from Williams’ 10 o’clock. Williams turned and pulled towards the MiG formation, firing a short burst at the “tail-end Charlie” of the group. It fell away, marking Williams’ first kill of the day.

As the two MiG formations gained altitude to make their attacking dives, Williams found himself on the tail of one and downed a second aircraft.

Because the Panther carried less ammunition than the MiGs, Williams had to choose his shots carefully.

“In the moment I was a fighter pilot doing my job,” said Williams. “I was only shooting what I had.”

The five remaining Soviet jets were now taking turns climbing and then making passes at Williams. He could only twist and turn the Panther to the limits of its abilities, engaging a Soviet jet when it passed in front of his sights or rapidly turning to face them head on.

Williams fired at another MiG and it banked out of the fight. As that Soviet pilot’s wingman turned towards Williams, he fired a long burst as the two jets passed belly-to-belly, with the Soviet aircraft crashing into the sea.

In more than 30 minutes of aerial combat, Williams had downed at least three of the MiGs, with a fourth one heavily damaged.

His plane, though, had suffered plenty of damage of its own.

“I was turning and one guy hit me with the 37mm cannon that knocked out my hydraulics,” said Williams.

With no ammunition and a plane that could barely fly, Williams was headed back towards the Oriskany, using his remaining flight controls to maneuver the aircraft.

Diving low into the clouds, Williams considered ejecting but decided to keep flying.

“I knew in that weather I wouldn’t have survived in the time it took to find me,” he said.

As Williams approached the Navy task force, the ships at first fired on him, mistaking him for an enemy aircraft. Coming around for a second attempt to land, Williams couldn’t keep the aircraft below 170 knots — which made the approach precarious considering the Panther’s normal landing speed was 105 knots, or roughly 120 miles per hour. Still, he managed to land the jet.

On deck, there were 263 holes counted in Williams’ Panther, although he never saw it again. It was supposedly pushed off the deck into the sea, with the gun camera footage being taken away for analysis.

It was then that the national security implications of the encounter began to take hold. While Soviet volunteers were known to be flying in Korea, Williams had engaged the actual Soviet Air Force. Furthermore, his flight had been made aware of the Soviet jets based on intelligence from a small detachment from the National Security Agency — then less than a year old — operating on one of the other ships in the task force.

Williams was informed by Navy Adm. Robert Briscoe, commander of Naval Forces Far East, that while it was confirmed he had shot down three and possibly four MiGs, he was not to discuss the engagement with anyone, ever.

Which is what Williams did. Through the rest of his career — another 23 years including 110 missions in Vietnam — the only official record of the engagement was Williams’ one confirmed kill and a Silver Star. Two of the other pilots in Williams’ flight that day also received credit for downing enemy aircraft.

Four decades later, with the collapse of the Soviet Union, records began to emerge from Moscow confirming the engagement. The dogfight was covered in a 2014 book by Russian historian Igor Seidov, “Red Devils Over the Yalu: A Chronicle of Soviet Aerial Operations in the Korean War.”

There’s now a long-simmering campaign for Williams to receive the Medal of Honor. Navy veteran Steve Lewandowski gathered signatures from nearly 100 Navy, Marine, and Army flag officers supporting the action, as well as resolutions from the American Legion and Distinguished Flying Cross Association.

But because the incident officially didn’t happen, finding the necessary documentation is still an uphill battle. However, if you’re looking for the real life Maverick, he’s still out there.