Consider the wartime love letter: a tradition of military service, a downrange sufferer’s record of affection and longing, sent home... 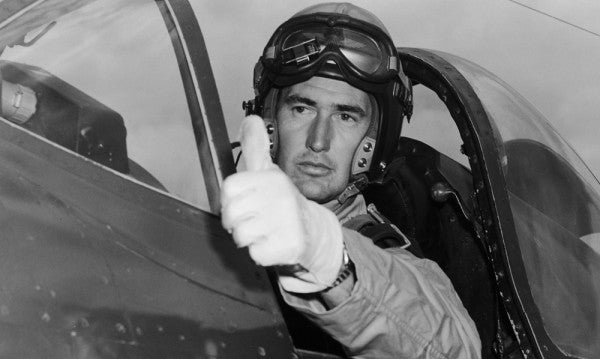 Consider the wartime love letter: a tradition of military service, a downrange sufferer’s record of affection and longing, sent home to a waiting love, often saved by the receiver for posterity.

Boston Red Sox legend and MLB Hall of Famer Ted Williams was no exception to this tradition: While serving with the Marines in the Korean War, he found time to write 38 letters about the stress of conflict, personal loss, and romance… to his mistress.

Now they’re up for auction, according to the Associated Press.

Williams was married to his first wife, Doris Soule at the time, but from 1952 on, he wrote the three dozen wistful letters to his sidepiece, Evelyn Turner — who worked as a flight attendant while Williams served in Korea as a Marine fighter pilot. (Soule and Williams divorced in 1954.)

William’s missives to Turner covered everything from flying a plane riddled with bullets to his feelings on the death of his father, along with musings about his second break from professional baseball to jump into the cockpit, having done similarly when World War II broke out.

“I had holes all over the plane and I was riding on all the prayers people say for me ‘cause I was awfully lucky. My plane was burning like hell when I crash landed. Everybody around here now is calling me lucky. Anyway, I’m missing you,” Williams wrote to Turner, describing the day he crash-landed his F9F Panther following a mission.

William’s letters — along with other items from Turner’s estate, including baseball memorabilia — will go to auction Jan. 3.

“They’re his innermost thoughts during the Korean conflict,” Troy Thibodeau, who is putting the letters up for bidding through Saco River Auctions, told the Associated Press.

Before you get misty-eyed over the romance of it all, it’s important to remember that this is actually the second set of love letters between Williams and a mistress that have gone up for auction. According to the AP, six letters from the pro baller to a woman named Norma Williamson sold for thousands in 2011.

Nor did Williams’ and Turner’s romance stand the test of time. Al Christiano, Turner’s son, told the Associated Press that after a decade-long affair, the pair split when Williams told her that she would come in “third place — behind baseball, and fishing.”