The Army has officially canceled its search for an off-the-shelf 7.62mm Interim Combat Service Rifle (ICSR) meant to replace the... 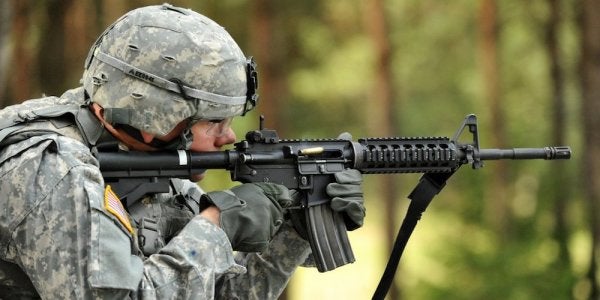 The Army has officially canceled its search for an off-the-shelf 7.62mm Interim Combat Service Rifle (ICSR) meant to replace the standard-issue M4 carbine — a major setback in the branch’s search for a new infantry rifle to augment soldier lethality.

Army Contracting Command announced the cancellation of the ICSR program on Nov. 28, citing a “reprioritization” of funding for the commercially made service rifle to the Next Generation Squad Weapon (NGSW) as a replacement for both the M4 and M249 Squad Automatic Weapon and “a long-term solution to meet the identified capability gap instead of the ICSR, which was an interim solution.” The announcement did not disclose the scope of the funds involved, and PEO Soldier and U.S. Army Contracting Command did not immediately respond to inquiries from Task & Purpose.

The saga of the ICSR has been a turbulent one. In May, Army Chief of Staff Gen. Mark Milley told lawmakers that the current 5.56 mm rounds chambered in the M4 and M16 assault rifles ubiquitous among infantry troops (namely the M855A1 Enhanced Performance Round) cannot penetrate modern enemy body armor; the same month, he told Senate Armed Services Committee members that Maneuver Center of Excellence officials at Fort Benning, Georgia, had engineered a new 7.62mm round capable of defeating plates similar to U.S. military-issue Enhanced Small Arms Protective Inserts.

Vice Chief of Staff Gen. Daniel Allyn translated Milley’s testimony into a directed requirement for a new 7.62 mm rifle. Shortly after his appearance before SASC, the Army issued a request for information to “identify sources for a combat rifle system” that could deliver up to 50,000 weapons over a truncated timeline; in August, the branch issued a formal solicitation with a simple objective: “to acquire and field a 7.62mm ICSR that will increase soldier lethality.”

On paper, the ICSR looked like a sweet little rifle upgrade. The Army’s original RFI detailed needs for a rifle platform with either a 16 or 20-inch barrel with collapsible buttstock, a 20 to 30-round magazine in support of the standard 210 loadout, noise and flash suppression, compatibility with the Family of Weapons Sights-Individual system that connects rifle sites to a soldier's night-vision goggle, a standard Picatinny rail system for optics, and other accessories. Had the Army moved forward with the program, the ICSR would’ve chambered either the new M80A1 or XM1158 Advanced Armor Penetrating rounds.

Unfortunately, the cancellation of the ICSR has been rumored for months: Military sources told The Firearm Blog on Sept. 20 that the program had become subject to a “massive review of U.S. Army small arms programs.” That review coincided with a three-month continuing resolution on the federal budget in Congress that Secretary of Defense James Mattis, in a Sept. 8 letter to Sen. John McCain obtained by Defense News, warned would jeopardize the ICSR effort along with 17 other Army programs. While the Army’s 7.62mm M110A1 Compact Semi-Automatic Sniper System program is still in the works, the ICSR simply wasn’t as lucky.

While PEO soldier program executive officer Army Brig. Gen. Brian Cummings in early October rebutted cancellation rumors, telling Military.com that the ICSR program “is not dead” and a decision “ not been made.” But sources told Military.com that Milley had already opted to ditch the requirement detailed by Allyn in May and formally established in the August solicitation.

At the same time, the ICSR’s demise was always meant to be, y’know, “interim.” In an Oct. 3 update on the Army’s Modular Handgun System, Cummings noted that the “long-term way ahead” for the branch’s focus on lethality was always the NGSW. And Cummings hinted that if any program would get the axe, it would be the ICSR: of the two Army programs focused on “ a 7.62 inside the squad,” he said, the squad-designated marksman role addressed by the CSASS sniper rifle trumps the ICSR as a equipping priority.

Don’t worry, though: the NGSW is no peashooter. After conducting a two-year comprehensive Small Arms Ammunition Configuration examination of ammo and fire control systems, the Maneuver Center for Excellence plans on using the NGSW as the primary platform for the next-generation small arms systems that Army researchers are pursuing in accordance with Milley’s laser focus on infantry lethality. The final vision for the weapon includes a heads-up display embedded in a conventional rifle scope, and, as Cummings told Marine Corps Times on Oct. 8, is “a wireless fire control system that senses wind, calculates distance and compensates for ballistics, all while being able to spot heat signatures through thermals.”

Speaking at the annual Association of the U.S. Army convention in October, Milley promised that the NGSW would provide “10 times improvement” in individual Army soldiers’ small arms capability “over any other system in the world,” a bold promise given his dire warnings delivered to Congress back in April. And while the NGSW may not see action downrange until 2022, the Army’s six-month emotional roller-coaster ride over the ICSR may just indicate how focused the branch is on trying anything and everything it can to make America’s soldiers deadlier than ever as soon as possible.