The Army has officially fielded the 7.62mm G28/HK417 rifle as the M110A1 Squad Designated Marksman Rifle to a handful of lucky soldiers 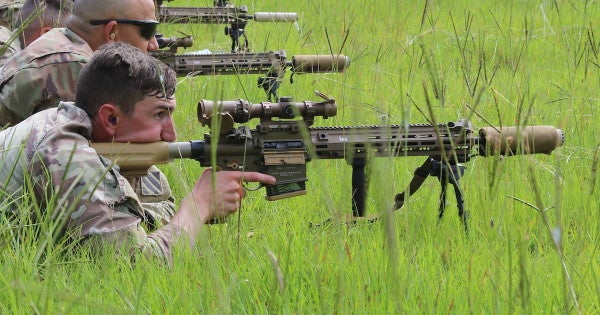 The Army has officially fielded its new squad designated marksman rifle to a handful of lucky soldiers, the service announced last week.

According to the Army, the SDMR is designed to fill the 300-600 meter capability gap between the standard issue rifle and a sniper rifle.

“This weapon is an upgrade to the whole squad layout, and you can even work it in to combined arms warfare.” said Sgt. Patrick Nissen, a scout from the Raider Brigade's 5th Squadron, 7th Cavalry Regiment, in a statement. “I shoot long range, both in the Army and recreationally, and I really like getting down behind this weapon, it is very comfortable, it is a great rifle, and I really do enjoy it.”

Heckler & Koch shipped its first batch of 7.62mm G28/HK417 rifles from its Georgia installation into the waiting hands of Army officials this past April, and deliveries of the M110A1 SDMR are expected to continue “through the middle of 2021,” according to H&K.

While soldiers from the Raider Brigade are the first in the Army to formally field the SDMR, the Army doled out a handful of M110A1 rifles to several units at Fort Bliss, Texas, in December 2018 following an initial fielding of 120 CSASS rifles to 82nd Airborne units the previous September.

In January 2019, soldiers 1st Armored Brigade Combat Team, 1st Armored Division were conducting testing on the new SDMR to provide feedback to PEO Soldier ahead of mass fielding of the system.