The Army has selected an optic for its new sniper rifle 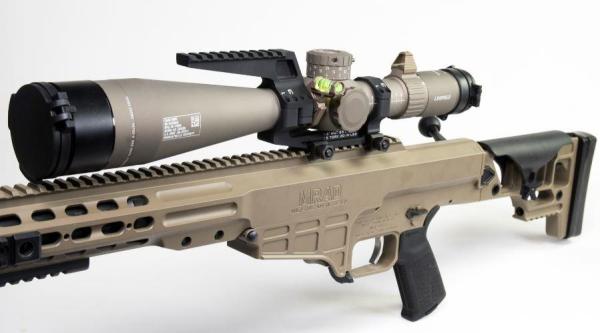 The Army has officially selected a fresh optic to go with its brand new Precision Sniper Rifle.

Oregon-based sightmaker Leupold will furnish the service with its Mark 5HD 5-25×56 rifle scope to use on the Mk 22 Mod 0 PSR that's based on the Barrett MRAD bolt-action multi-caliber system, the company announced last week.

The new scope comes in the company's proprietary flat dark earth coating and will utilize the Army’s patented Mil-Grid Reticle, according to the Leupold.

“The Mark 5HD has been built from the ground up to deliver the unparalleled performance that the men and women serving our country overseas require,” Leupold military sales director Sam Horstman said in a statement. “And, like all of our optics, the Mark 5HD has been strenuously tested for durability, and fully meets the extremely high standards that the military demands.”

Initially selected by U.S. Special Operations Command for its Advanced Sniper Rifle program, the MRAD comes chambered in 7.62×51 mm NATO, .300 Norma Magnum, and .338 Norma Magnum with the help of a separate conversion kit.

Both the Army and Marine Corps included the procurement of the MRAD in their fiscal year 2021 budget requests.

The Army wants to purchase 536 MRAD sniper systems for roughly $10.13 million under its PSR program to replace both of the service’s M107 sniper rifle and M2010 Enhanced Sniper Rifle systems, according to budget justification documents

The Marine Corps wants to purchase 250 MRAD sniper systems under SOCOM’s ASR program for roughly $4 million to “replace all current bolt-action sniper rifles” currently used by the service, according to budget justification documents.

The service plans to begin fielding of the rifle starting in the fourth quarter of fiscal year 2021.

SEE ALSO: This is the US military’s next sniper rifle of choice

WATCH NEXT: Why the Army cancelled its XM series of weapons