Marines are officially getting a brand new rifle optic 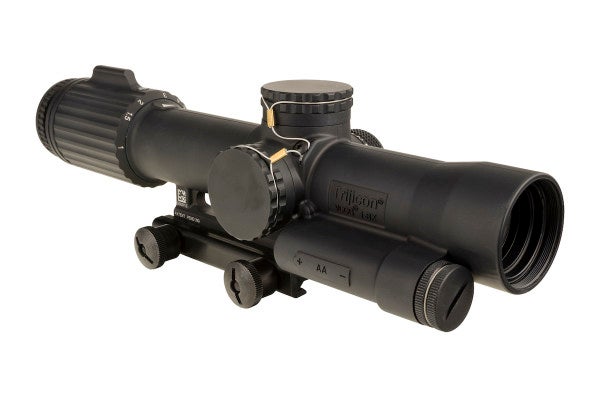 The indefinite delivery/indefinite quantity contract with Michigan-based defense contractor Trijicon will supply the Corps with approximately 19,000 of the new optic, according to a Sunday press release from Marine Corps Systems Command.

The service plans on fielding the new optic to the fleet to replace the existing Trijicon-made Rifle Combat Optic on the M4/M4A1 carbine and M27 Infantry Automatic Rifle starting in the first quarter of fiscal year 2021.

In a request for information issued last year, the Corps detailed a need for a a new optic capable of engaging targets between 600 and 900 meters away at eight times magnification, according to Marine Corps Times, well beyond the capabilities of the existing RCO.

The Corps also wanted the new SCO to weigh less than 2.1 pounds and feature an eye relief — the distance a shooter needs to keep their eye from an optic lens to maintain an appropriate field of view — of 3.1 inches to 3.7 inches.

To meet this need, the Corps has selected the waterproof Trijicon VCOG (Variable Combat Optical Gunsight) 1-8×28 riflescope, the company announced in a Monday press release detailing the scope’s specifications:

Specifically designed for Close Quarter Battle and long distance marksmanship, the Trijicon VCOG 1-8×28 is forged from a nearly indestructible 7075-T6 aluminum housing and is waterproof to 66 feet. The first focal plane reticle allows subtensions and drops to remain true at any magnification. Featuring ruggedized electronics, the VCOG includes eleven user-selectable brightness settings, including two night vision settings. An integrated dial fin allows easy rotation through the magnification range, and a near-constant eye relief means no head or stock position adjustments are needed. An integrated mounting adapter eliminates the need for conventional ring mounts, allowing users to quickly and easily mount the VCOG to any rail system.

“We introduced VCOG 1-8×28 to the commercial market in early 2019, but its design was inspired by requests from our warfighters,” Trijicon vice president Chuck Wahr said in a statement. “During design, development, and testing, we constantly challenged ourselves to produce a scope that would deliver the performance necessary in the most punishing of conditions.”

The Marine Corps requested $98.122 million as part of its fiscal year 2020 budget for improved optics, including $19.4 million for initial procurement and fielding of the SCO, according to budget documents.