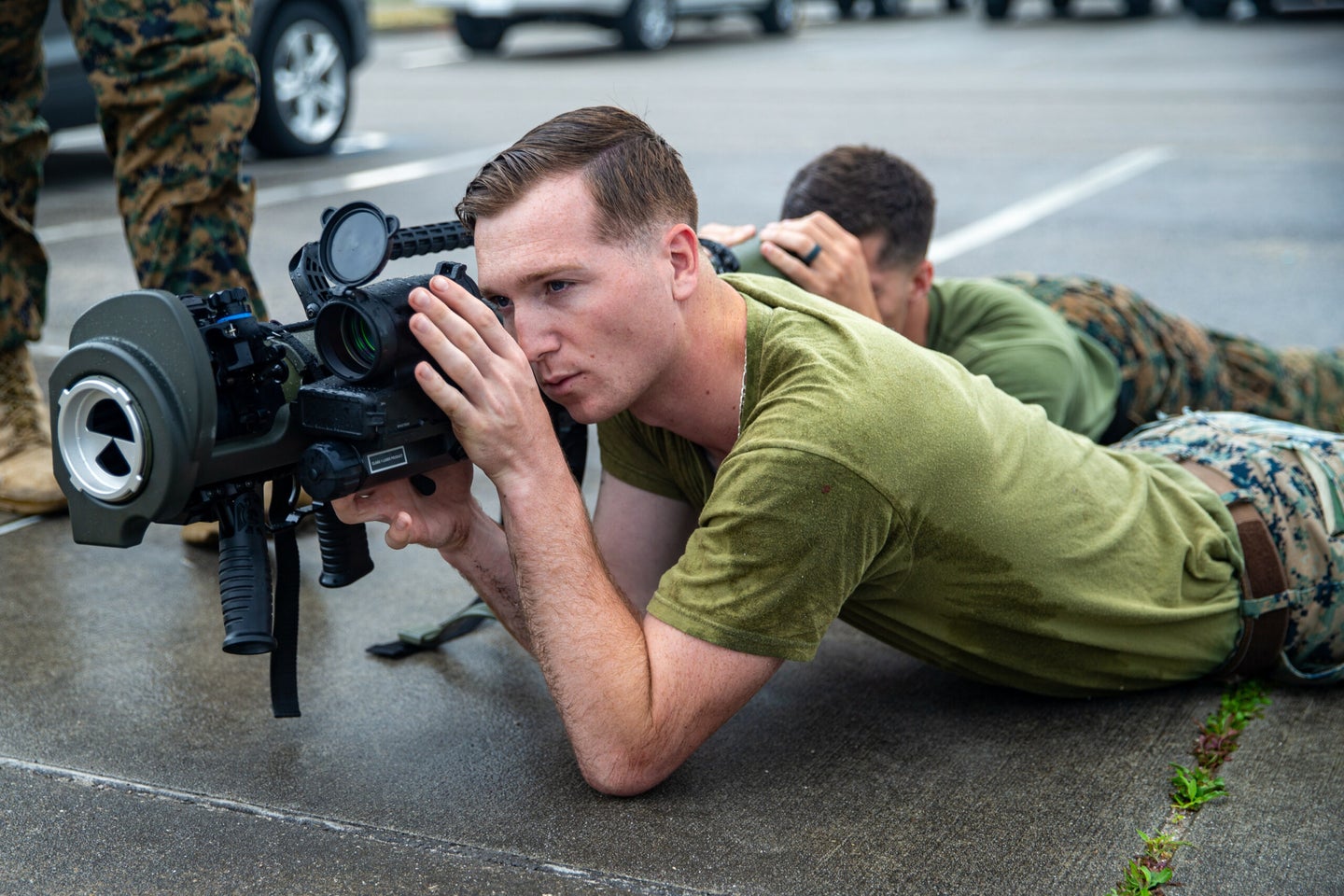 Editor’s note: This article was heavily updated after its July 7, 2021 publication with additional information from the Marine Corps on the specs of the M3E1 Multi-Role Anti-Armor Anti-Personnel Weapons System.

The Marine Corps — which sometimes seems like the Oliver Twist of the U.S. military — is getting something new. Well, sort of.

Starting in May, infantry Marines at Camp Lejeune, North Carolina began getting their hands on the M3E1 Multi-Role Anti-Armor Anti-Personnel Weapons System, or MAAWS, according to a recent statement from the service.

The MAAWS is a reloadable, recoilless rocket system that serves a similar function to the Mk 153 Shoulder-Launched Multipurpose Assault Weapon, or SMAW, but with some notable improvements, like greater range and a better optic.

It also marks the Corps’ newest recoilless rifle since the SMAW was fielded in the mid-1980s.

The MAAWS consists of an M3E1 Carl Gustaf Recoilless Rifle, a fire-control system and a backup reflex sight that Marines can switch to if the main optic malfunctions (read: if a lance corporal breaks it.)

The MAAWS, like the SMAW, requires a gunner to fire the weapon and another Marine to lug around the ammo and help load it. In terms of weight, the Marine Corps was mum about that, but the Army, which also fields the weapon, notes that the M3E1 comes in at 14.2 pounds, with a 4.8-pound fire control system for a grand total of 19 pounds.

“The MAAWS is a reusable, long-range weapon that provides the capability to destroy armored vehicles, structures and fortifications, which will be useful for infantry Marines,” Capt. Christopher Adsit, the weapon’s project officer, said in the statement.

“This new rocket system shoots farther than any of our current shoulder-launched rocket systems,” Adsit said. “It significantly increases the shoulder-fired rocket range.”

The MAAWS system “enables Marine Infantry and Combat Engineer Squads to engage in offensive and defensive operations with anti-armor, antipersonnel, anti-material, and assault capabilities,” according to the service’s recently-released fiscal year 2022 budget request.

“It has the ability to fire [illumination], smoke and airburst-style rounds,” Marine Chief Warrant Officer 4 David Tomlinson, an infantry weapons officer with Marine Corps Systems Command said in a press release. “The capability will allow the warfighter to engage the enemy in defilade, reinforced bunkers and buildings.”

While budget documents indicate that the Marine Corps has procured hundreds of MAAWS systems over the last several years, the fielding to grunts at Camp Lejeune represents the first widespread distribution of the system to infantry battalions.

Now, as for why we’re not calling the MAAWS totally ‘new’: It’s been in the Army’s hands for years, and is only now making its way to the Corps.

This should surprise no one. The Marine Corps is often the last one to the table when the defense budget is divvied up each year, and the service often gets its hands on ‘new’ weapons years after they’ve been in use by other branches. Consider the M320 grenade launcher, which saw use by the Army and in popular video games before it ever reached active-duty Marines.

Earlier this year, nearly 100 Marines had a chance to test the MAAWS at the Marine Corps’ East and West Coast infantry schools. The schoolhouses are expected to get their hands on the weapon first, after which time it will be fielded to active duty Marines across the force by 2024, with every Marine Corps infantry battalion projected to have the weapon system by 2025, according to the release.

According to the Marine Corps, the MAAWS outmatches the SMAW — which was first fielded in 1984, and heavily upgraded during the 2000s — in terms of range, and it stands a better chance of hitting moving targets thanks to its fire control system.

“This weapons system is able to shoot several different rounds with variant distances out to 1,300 meters,” explained Kelly Flynn, a spokeswoman for Marine Corps Systems Command. On the flip side, the SMAW is effective at 300 to 400 meters, Flynn added.

The MAAWS also surpasses the single-use M72 Light Anti-Tank Weapon (LAW), in terms of firepower, seeing as the MAAWS can be reloaded unlike the LAW, which is more ‘fire and forget’ than ‘let’s try again.’

“To date, no decision has been made on it replacing an existing weapons systems,” Flynn said.

Update: This article was heavily updated after its July 7, 2021 publication with additional information from the Marine Corps on the M3E1 Multi-Role Anti-Armor Anti-Personnel Weapons System