A handful of lucky Army units apparently picked up an early Christmas present this fall: A shiny new sniper system for the designated marksmen assigned to infantry, scout, and engineer squads 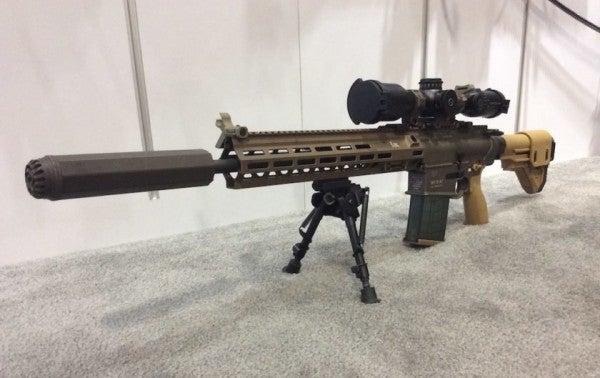 A handful of lucky Army units apparently picked up an early Christmas present this fall: A shiny new rifle for designated marksmen assigned to infantry, scout, and engineer squads.

A Dec. 27 update from Army Futures Command revealed that the Army has fielded the 7.62x51mm G28E-110 squad designated marksman rifle — adopted as the M110A1 Compact Semi-Automatic Sniper System (CSASS) back in 2017 — as planned to selected units stationed at Fort Bliss, Texas.

Based on the Heckler & Koch HK417 platform, the 2019 National Defense Authorization Act fully-funded the Army's proposed $46.2 million acquisition of 5,180 CSASS rifles with the eventual goal of buying as many as 8,711 of the lightweight 7.62mm systems.

Rather than traveling in two-man sniper teams, designated marksmen provide precision fire support as part of an infantry unit. As the War Zone notes, the first 120 CSASS rifles have already ended up in the hands of 82nd Airborne units, among others, starting in September 2018.

But soldiers at Fort Bliss aren't just getting a new lightweight rifle to play with. According to the Army Futures Command announcement, the CSASS is being fielded concurrently with the Enhanced Night Vision Goggle-Binocular that PEO Soldier wants to get into warfighter's hands by early 2019.

During testing, soldier outfitted with the CSASS and ENVG saw “a 100 percent improvement in weapons qualifications, along with a 300 percent increase in detection of targets in day and night environments, and a 30 to 50 percent decrease in the time taken to shoot a target,” per Army Futures Command — just the boost in lethality Pentagon officials have been harping on all year.

Time will tell if the Marine Corps follows the Army's lead: While the service's $40.8 billion proposed fiscal 2019 budget included just under $1 million for the service to procure just 116 CSASS rifles for testing replace the venerable M110, the service confirmed in early April that its snipers would get the Mk13 Mod 7 sniper rifle to replace the M40 rifle they've been lugging since the Vietnam War.

SEE ALSO: Up Close And Personal With The Army's Lethal New Sniper Rifle