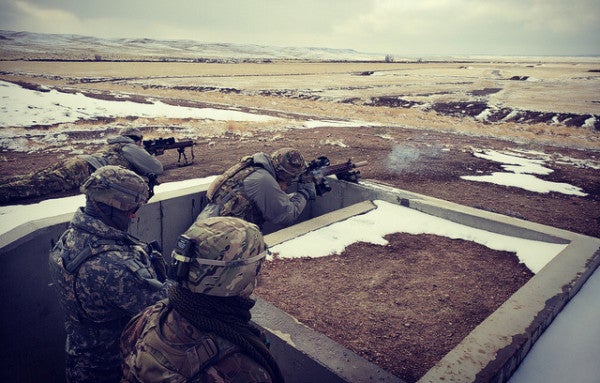 The Army may only have scored full approval from Congress to buy thousands of new M110A1 Compact Semi-Automatic Sniper Systems (CSASS) last year, but a cadre of Army snipers are already flexing on some upgrades.

While the Army has already fielded the rifle, based on Heckler & Koch's 7.62x51mm G28E-110, in a squad designated marksman role to select units Fort Bliss and Fort Bragg, the Ivy Division snipers are testing new features that include 'increased accuracy, plus other ergonomic features like reduced weight and operations with or without a suppressor,' according to an Army release.

And those tests were just to test the CSASS's 800 meter range. According to U.S. Army Operational Test Command's CSASS test officer Maj. Mindy Brown, the 2nd iBCT snipers fired off some 8,000 rounds in various configurations of their mission gear (think Ghillie suits) before facing off in force-on-force exercises they described as “the best sniper training they'd received since attending Sniper School.”

'We do this by having the Snipers employ the system in the manner and the environment they would in combat,” Brown, said in a statement. “In doing this, we achieve a twofold benefit for the Army as we test modernization efforts while simultaneously building unit — or in this case —Sniper readiness.”

A Sniper engages targets from behind a barrier during the short-range tactical scenario of the Compact, Semi-Automatic Sniper Rifle (CSASS) operational test at Fort Carson, Colo.(U.S. Army/Maj. Michael P. Brabner)

The 2019 National Defense Authorization Act fully funded the Army's proposed $46.2 million acquisition of 5,180 CSASS rifles with the eventual goal of buying as many as 8,711 of the lightweight 7.62mm systems. And based on the testing at Fort Carson, soldiers seem happy with the platform — or, at least, they're enjoying the testing.

“Despite single-digit frigid temperatures, gusting winds, and wet snow, the snipers really impressed me with their levels of motivation and competitive drive to outshoot each other,' Sgt. 1st Class Isidro Pardo said in the Army statement. Translation: Let's play.

SEE ALSO: The Coast Guard Has Better Snipers Than The Freakin' Marine Corps

WATCH NEXT: A U.S. Army Sniper And His Rifle In Afghanistan