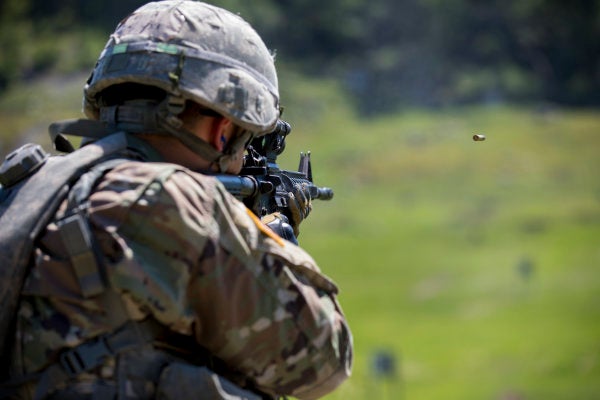 Engineers with the Army Research Laboratory are working on a new infantry weapon that, at half the weight and length of the M4 carbine, is capable of firing rounds at double the muzzle velocity of a standard-issue sidearm that could easily defeat enemy body armor.

The as-of-yet-unnamed prototype, currently in development at the ARL's Aberdeen Proving Ground in Maryland, integrates an unusual breech and barrel design and an improved tapered-bore barrel to achieve lethality at extended range — and despite its dainty 10-inch barrel, apparently outperforms other compact firearms like the FN P90, reportedly hitting a muzzle velocity of roughly 2,900 feet per second.

“The goal is to get rifle-like velocities out of a very small weapon that is high capacity, that's either adaptable for room-clearing or confined spaces,” ARL engineer Zac Wingard told TechLink, which first reported on the development of the new weapon. “Like you're getting in and out of vehicles or a subterranean environment, but also applicable for remotely operated systems.”

Unfortunately, rank-and-file soldiers won't get their hands on this lethal bad boy anytime soon. While the pursuit of lethality at range has induced the Army to engineer a brand new Next-Generation Squad Weapon (NGSW) chambered in an intermediate 6.8mm cased-telescoped round to lighten the system's overall weight, this ammo requirement means that the NGSW will remain a distinct platform from the weapons system that researchers are cooking up at Aberdeen.

“This effort is not the Next-Generation Squad Weapon intermediate caliber,” ARL engineers said in a response to an inquiry from Task & Purpose, noting that the service couldn't yet provide a specific effective range for their unnamed project. “This effort is about accelerating technology transition from the laboratory prototype and integrating into other programs.”

The way the prototype is designed is relatively simple. While increased chamber pressure would require the significantly bulkier bolt assembly to accommodate for the additional force, the new rifle's barrel breech assembly locks in like a screw. In addition, tapered-bore barrels allowed Army researchers to translate that increased chamber pressure into additional kinetic energy on the round itself, maintaining lethality at extended ranges.

While the overall goal of the ARL project is to reduce the system's overall weight and bulkiness, the added chamber pressure packs a delightfully lethal punch when applied to various platforms. As researchers told TechLink, one 24-inch tapered-bore barrel produced velocities of between 4,600 to 5,750 feet per second and boosted overall chamber pressure to between 65 ksi and 100 ksi, near double that of the M4 carbine.

Based on the Army's response to Task & Purpose, it seems likely that at least some of the engineering lessons picked up on the ARL prototype will make their way into the NGSW platform that officials once equated to the iPhone in its relatively versatility and potential for iterative improvements.

Indeed, Army HQ force development division chief Col. Geoffrey A. Norman previously told Task & Purpose that the NGSW would fire a small bullet “at the pressure equivalent to what a tank would fire” using specially-designed ammo in order to maintain kinetic energy at ranges up to 600 meters.

“The chamber pressure for the standard assault rifle is around 45 KSI , but we're looking for between 60 and 80 KSI … the chamber pressure when an M1 Abrams tank fires is on that order,” Norman said during a February 2018 interview. “We're looking to reach out around 600 meters and have lethal effects even if the target is protected by body armor.”

All of this, Norman added, was in the service of the U.S. military's broad pivot to so-called “great power competition” with adversaries like Russia and China.

“For the past 10 or 15 years, we've been really focused on the requirement of lethal effects against unprotected targets,” he said at the time. “Now we're looking at near-peer threats like Russia and others. We need to have lethal effects against protected targets and we need to have requirements for long-range lethality in places like Afghanistan, where you're fighting from mountaintop to mountaintop over extended ranges.”

Update, June 5: This headline has been updated to better reflect the broad focus of the ARL project beyond just near-peer threats

SEE ALSO: The Army Is Eyeing Facial Recognition Tech For Its Next-Generation Rifle