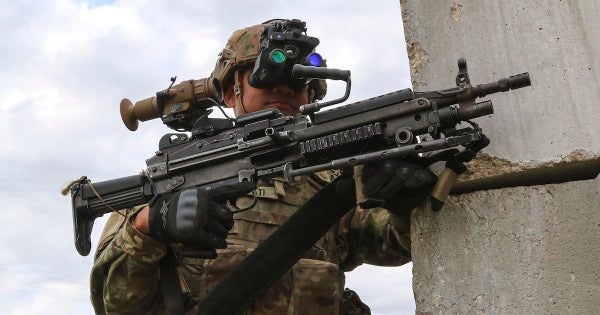 The Army is launching an accelerated effort to find commercially-available technologies to provide new and enhanced capabilities for the service's arsenal of soldier-wielded weapons.

“We have to continue to try to be innovative about how we maintain overmatch to threats as they evolve,” Doug Cohen, director of systems engineering at PM SL, told Task & Purpose.

“Within the last 10 years, our office has fielded over a million small arms weapons and accessories, and those have all been a way that we've increased soldier lethality,” he added. “This is just another tool in our tool belt to drive even more improvements and innovation out into the field.”

According to Cohen, the new IDEA program was directly inspired by a similar program launched to supplement the Next Generation Squad Weapon (NGSW) program that was initiated to a “one end-all solution” replacement for the M4 carbine and M249 Squad Automatic Weapon.

If the NGSW program is supposed to produce the iPhone of lethality, as Task & Purpose previously reported, then the NGSW IDEA program was designed to identify as many killer apps as possible.

“The NGSW kicked off a pilot of this IDEA program as a way to rapidly and in an agile manner seek out opportunities for people to provide us with proposals for innovative ideas to increase our capabilities,” Cohen said. “We did that under the NGSW program and based on some of its successes, we decided to roll it out.”

Those successes under the NGSW IDEA program include suppressors, barrel technology and coatings, and optical-based systems, all of which have received various contracts since the original program was launched nearly two years ago.

Indeed, ACC recently in April awarded a pair of contracts to both OSS Suppressors LLC and CGS Group to furnish PM SL with suppressors under the NGSW IDEA program. That same month, ACC awarded optics firm Vortex an agreement to deliver production-ready prototypes of a NGSW-Fire Control system under the auspices of the IDEA program.

In some ways, the IDEA program is like a blank check to pursue commercial, off-the-shelf tech for soldiers. With Army modernization officials relentless in their pursuit of lethality amid the resurgence of so-called 'great power competition' against near-peer adversaries like Russia and China, Cohen told Task & Purpose that the PM Soldier Lethality IDEA program is intended to be “as broad as possible.”

“We're trying to leave it wide open because there may be things out there we're just not aware of,” Cohen said. “Ultimately, if our soldiers get increased capability through increases in lethality, accuracy, mobility, then we'll continue to have an edge against our adversaries.”

First established at the beginning of July, the PM SL IDEA program will remain open until June 30, 2021.