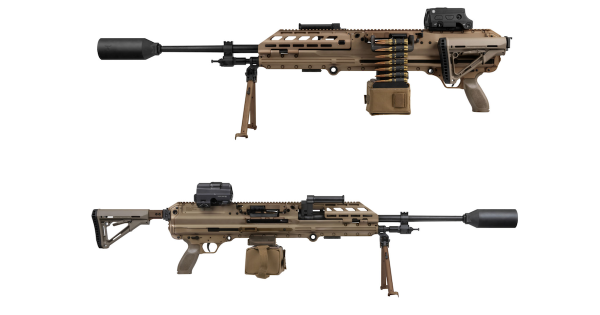 According to Sig Sauer, SOCOM has completed its official safety certification for the MG 338 and taken delivery of “multiple systems” comprised of the machine gun, .338 Norma Magnum ammunition, and suppressors, a first for the command.

'For the first time in decades the U.S. military certified a new machine gun, ammunition, and suppressor at the same time, bringing new innovation, portability, and increased lethality to our ground forces, with all components coming from one company,” Sig Sauer President and CEO Ron Cohen
said in a statement.

“This certification was achieved following the outstanding performance of the complete MG 338 system through the rigors of the extensive function, durability, and safety tests set forth by [SOCOM],” he added.

SOCOM has been on the hunt for a new lightweight machine gun — now dubbed the Lightweight Machine Gun-Medium (LMG-M) — since 2017, when a contract listing
specified a need for 5,000 systems capable of firing fire belt-fed .338 Norma Mag rounds with “sufficient accuracy to engage area targets and vehicles at 2,000 yards.”

SOCOM had previously announced in May 2019 that the command would conduct limited user evaluations of prospective .338 Norma Mag machine guns between October of that year and this coming May,
per The War Zone, after which the command would formally decide to move forward with a LMG-G system.

A May 2019 briefing slide on the LMG-M program(U.S. Special Operations Command via The War Zone)

According to Sig Sauer, the MG 338 will bridge the gap between the current 7.62mm M240 machine gun and the .50 cal M2 in terms of effective range and man-portability. Indeed, the company claims that the MG 338, with its weight of just 20 pounds, is “noticeably lighter” than the M240 while offering a maximum effective range similar to the M2.

The MG 338 “can be converted to fire 7.62mm ammunition, as well,” according to The War Zone, a conversion which “would allow special operators to conduct various types of general training, such as basic familiarization with the gun and its controls, without having to use more expensive .338 Norma Magnum ammunition”

“We are incredibly proud of this historical accomplishment and honored to have received this safety certification by [SOCOM] for the performance of the complete MG 338 system,” Cohen said in a statement.

For more details on the MG 338, I highly recommend you visit this
detailed article at The War Zone. In the meantime, check out this sizzle reel of the new system courtesy of Sig Sauer: