There's a bit of good news for Marines grunts tasked with rocking the iconic M2 .50 caliber machine gun: your loads are about to get a little bit lighter 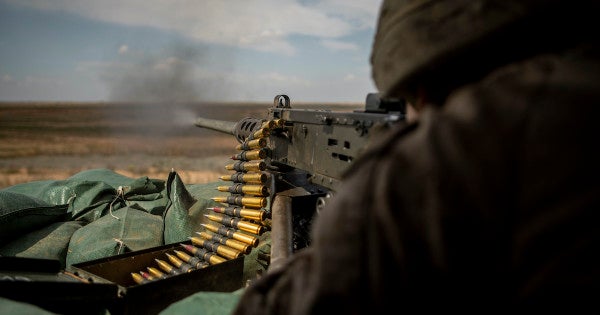 There's a bit of good news for Marines grunts tasked with rocking the iconic M2 .50 caliber machine gun: your loads are about to get a little bit lighter.

The Marine Corps has awarded a $10 million contract to Mississippi-based MAC LLC to furnish the service with the company's MK 323 Mod 0 polymer ammunition for the M2 machine gun, Marine Corps Systems Command announced on Friday.

According to MARCORSYSCOM, the service intends to replace its brass ammunition, steel cans, and traditional metal links with MAC LLC's polymer and nylon substitutes in order to both reduce load weights for Marine grunts and allow troops to haul more ammo.

Under the Corps' requirements, one belt of 100 .50 cal cartridges would see up to a 30 percent weight reduction, with an overall goal of shaving roughly 20 pounds off of the current weight of a can of .50 cal ammo, as Task & Purpose previously reported.

Because polymer ammo is highly heat-absorbent, the new ammo will allow Marines to fire the beloved M2 for longer periods of time without the risk of overheating, according to John Carpenter, assistant program manager for ammo engineering.

“When we go to war, we need more ammo to defeat our adversaries,” Lt. Col. Bill Lanham, MARCORSYSCOM's deputy program manager for ammunition, said in a statement announcing the new contract. “Polymer ammo gives Marines the opportunity to carry more ammunition or make trades with what gear is important to carry during combat.”

The Marine Corps had previously announced plans to order nearly 2.4 million polymer-cased .50 cal rounds from MAC LLC over a three-year ordering period, as The Firearm Blog reported at the time.

According to MARCORSYSCOM, Marines will start receiving a “small quantity” of polymer ammo in the fourth quarters of fiscal years 2020 and 2021 to assess the effectiveness of the rounds before finally fielding the new lightweight ammo some time in fiscal year 2022.