Two federal law enforcement agencies are investigating whether a former Marine impersonated an officer to help an active duty infantryman smuggle arms into Haiti, according to court filings viewed by Task & Purpose. 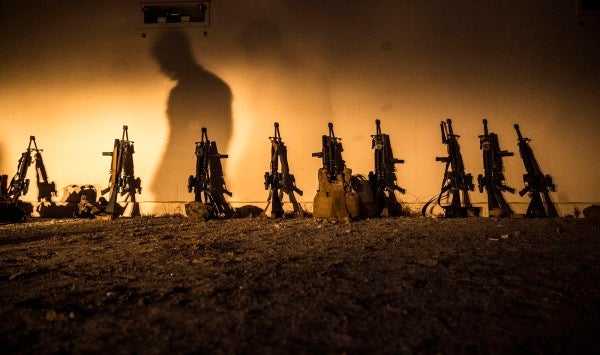 Two federal law enforcement agencies are investigating whether a former enlisted Marine pretended to be an officer to help an active duty infantryman smuggle arms into Haiti, according to court filings viewed by Task & Purpose.

Marine Sgt. Jacques Yves Sebastien Duroseau was detained by local police in Haiti after he landed at the international airport in Port-au-Prince on Nov. 12 with three plastic boxes containing guns, ammo, body armor, and a plan to train members of the Haitian military, the filings claim.

A federal criminal complaint filed on Nov. 27 in the Eastern District of North Carolina alleges that Duroseau was aided by a “known individual” who purchased his plane ticket, and helped him bring the weapons to the Coastal Carolina Regional Airport in New Bern, North Carolina for his flight on Nov. 11. That individual, according to a Nov. 22 affidavit in support of a search warrant of Duroseau’s residence, is Taylor Hickey, a former Marine who lived with Duroseau in Jacksonville, North Carolina.

Hickey declined to comment when reached by Task & Purpose. Duroseau’s attorney did not respond to a request for comment.

The recently unsealed affidavit said that security camera footage showed Hickey at the airport wearing a Marine camouflage uniform with the rank of captain, despite leaving active duty as a sergeant. Duroseau wore civilian clothes.

“Based on conversations with other law enforcement agents and retired military members, it is reasonable to believe Hickey wore the uniform to gain a benefit or obtain preferential treatment at the airport on Veterans Day,” reads the affidavit, filed by Charles J. Kitchen, a special agent with Homeland Security Investigations, an investigative arm of the Department of Homeland Security.

Kitchen noted that American Airlines offers complimentary checking of up to three bags for military personnel, which may have explained Hickey’s choice of dress.

According to the affidavit, Hickey and Duroseau checked three suitcases, in addition to three plastic cases containing eight firearms and ammunition. The first two plastic boxes contained the guns, while the third case held ammunition, but because of the weight, Duroseau removed some of the ammunition and handed it off to Hickey, who stood off to the side taking notes in a notebook.

Duroseau then filled out a declaration form with American Airlines stating that the firearms were unloaded. Needless to say, he did not have permission from the Marine Corps to leave the United States, or export firearms.

A photo reportedly showing several of the handguns Duroseau attempted to bring into Haiti, according to the MiamiHerald.(@madanboukman/Twitter)

Duroseau then boarded his American Airlines flight, and set off for Haiti, where he was promptly stopped when he landed the next day by customs agents for a secondary inspection. According to the affidavit, agents found the following weapons: a Beretta model 65490; a Sig Sauer model SP2022; a Sig Sauer model P229; a Sig Sauer model P320; a Spikes Tactical model ST15; a Springfield Armory model Saint; a Precision Ruger model 300 WIN MAG; and a Armscor Model M1911-Al CS caliber 45. Photos of the weapons quickly circulated online, according to the Miami Herald.

Additionally, the plastic cases contained body armor, bullet-proof SAPI plates, and a “United States Marine Lieutenant Colonel uniform” with Duroseau’s name on the nametags, despite the fact that he is a sergeant, the affidavit says.

Duroseau was taken into custody by Haitian authorities for “local violations,” according to the Nov. 27 criminal complaint.

When questioned, Duroseau told investigators he traveled to Haiti in order to help the Haitian people, and that he wanted to “wear the uniform of the military that’s been established,” and to “defeat the thugs that have been creating a little bit of part of the instability in Haiti,” according to the complaint.

A photo reportedly showing a rifle Duroseau was bringing into Haiti, according to the MiamiHerald.(@madanboukman/Twitter)

A Marine infantryman, Duroseau said that he intended to teach marksmanship to the Haitian Army, citing his experience as a firearms instructor in the Marines. He admitted that he knew that transporting firearms was illegal, but went on to tell investigators that he intended to be arrested, as part of his plan to develop a platform from which to make a statement.

“It’s still a part of the attention I need,” Duroseau told investigators.

On Nov. 26, investigators questioned Hickey, who said that Duroseau was going to be moving to Haiti once he left the Marines, and that he planned to become president of Haiti. Hickey also said that Duroseau claimed he was in contact with the U.S. embassy there, and that he’d made them aware of his desire to be president, according to the complaint.

Currently, there is “no public information available” on the status of Duroseau or Hickey’s case as “this is an ongoing investigation,” Don Connolly, a spokesman for the U.S. Attorney’s Office of the Eastern District of North Carolina told Task & Purpose.

“At this point no charges have been filed,” Connolly added.

The Department of Homeland Security did not respond to request for comment.

Hickey enlisted in the Marines on Oct. 22, 2012 and served as an administrative specialist, achieving the rank of sergeant before leaving active duty, according to Maj. Roger Hollenbeck, a spokesman for Marine Forces Reserve. The Marine Corps confirmed that Hickey is currently in the Inactive Ready Reserve, but declined to comment on when she left active duty.

As for Duroseau, his first encounter with the Marines didn’t begin at the recruiter’s office, but when he was a kid growing up in Haiti, according to a 2016 Marine Corps story which profiled him while he was a marksmanship instructor at Quantico, Virginia.

“When I was a kid, I saw the Marines back home we had a little war going on, that was the first time I saw them and I hope to be one of them,” he said. “Since that day I had it in the back of my head where I wanted to be a U.S. Marine.”

Duroseau enlisted in the Marine Corps in September 2011, and went through recruit training at Parris Island, South Carolina before attending the School of Infantry in January 2012.