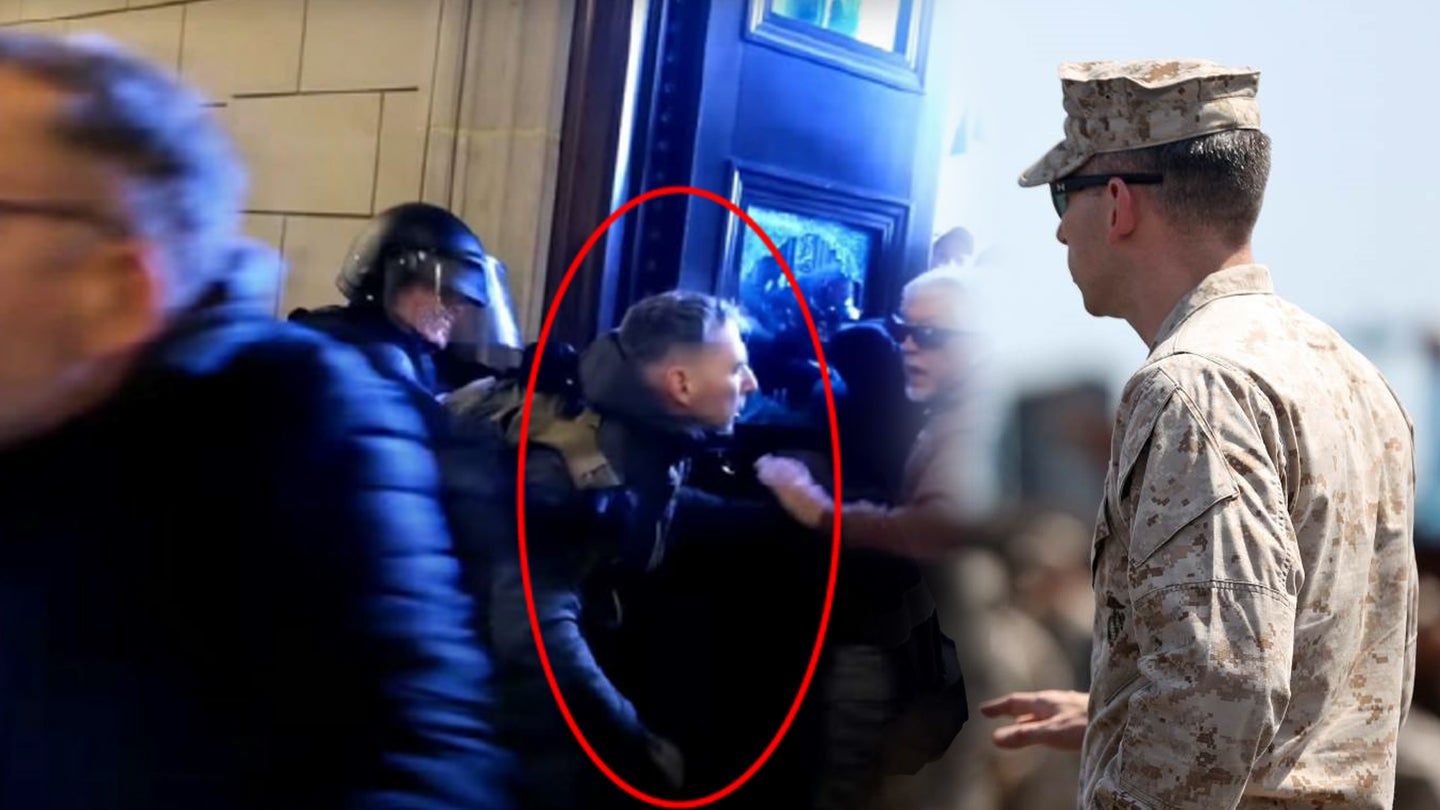 An active-duty Marine officer stationed in Quantico, Virginia was arrested on Thursday and charged with assault and obstruction of law enforcement officers during the Jan. 6 Capitol riots in Washington, D.C. He’s the first active-duty military member charged in the riots, according to the top Pentagon spokesman.

Court documents say Maj. Christopher Warnagiris pushed through a line of police officers at the Capitol that afternoon and then positioned himself in the doorway and helped pull others inside. The 40-year-old Marine officer allegedly pushed a U.S. Capitol Police officer “in an effort to maintain his position” in the doorway, according to the Justice Department.

You can see a video of the struggle below:

Several photographs of Warnagiris were included in a criminal complaint filed on Wednesday. Investigators determined he was an active-duty Marine after two coworkers recognized him.

At around 2:24 p.m. on Jan. 6, security cameras positioned inside the East Rotunda doors of the Capitol captured a group of people fighting their way inside the doors as officers attempted to hold them at bay outside. The officers eventually lost ground as the doors were opened wider. Warnagris was seen on video wearing a “dark jacket with bright green zippers, a military green backpack and black and tan gloves,” according to the complaint, which noted his hair was closely trimmed on the sides.

Warnagiris joined the Marine Corps in October 2002 and deployed at least six times to include stints in Iraq and Afghanistan, according to military service records. He was assigned to the 5th Marine Expeditionary Brigade when it took part in a 2017 exercise in Djibouti, according to an official military photo caption. A field artillery officer, he is currently assigned as a Marine Air-Ground Task Force trainer with the Corps’ Training and Education Command. His awards include three Navy and Marine Corps Commendation Medals, a Meritorious Service Medal, and a Defense Meritorious Service Medal.

“The Marine Corps is clear on this: There is no place for racial hatred or extremism in the Marine Corps,” said Maj. J.A. Hernandez, a Marine spokesman. “Our strength is derived from the individual excellence of every Marine regardless of background. Bigotry and racial extremism run contrary to our core values.”

This article was updated after publication with additional service details provided by a Marine official.

Related: These are the faces of extremism in the military