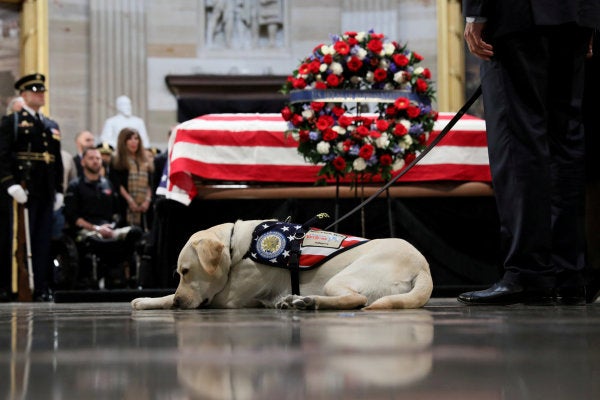 In his new role as a hospital “foreman” in a Walter Reed facility outside Washington, Sully's duties are to provide support, comfort and cheer to wounded veterans, their families and facility staff, thus reducing stress and increasing positive feelings, the medical center said.

“Sully will go on to spread his love at Walter Reed Hospital. He was a loving companion when my Gampy needed him most,” Jenna Bush Hager, Bush's granddaughter, posted on Twitter on Thursday.

The yellow Labrador is one of seven dogs working at the facility in Bethesda, Maryland. Collectively, they “average 2,500 contacts and over 200 working hours per month,” according to the medical center. He is about 2-1/2 years old, according to America's Vetdogs, the organization that trained him.

During the ceremony, which was posted in a video on Facebook, Sully prompted laughter from the audience when he raised his head and dipped his chest to stretch before taking his oath to care for veterans “without any promise of treats or tummy rubs.” Afterwards, he was fitted with a “militaryuniform,” a new vest he will wear while working.

Sully was named after Captain Chesley “Sully” Sullenberger, the pilot who landed a U.S. Airways passenger jet in the Hudson River after both engines lost thrust when the aircraft struck a flock of geese while taking off from New York's LaGuardia Airport.