The 8 Presidents With The Most Badass Military Records

It used to be that if you wanted to enter politics, military service was virtually a prerequisite. And though the... 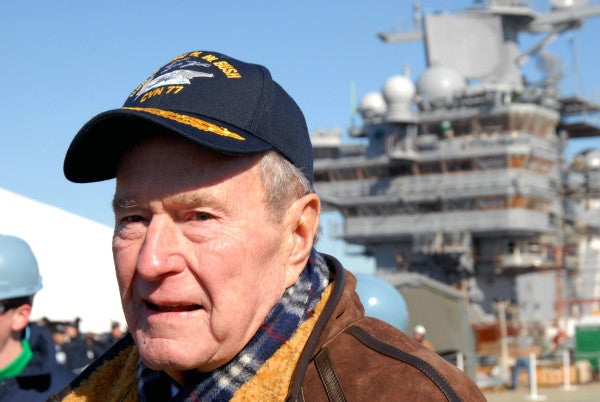 It used to be that if you wanted to enter politics, military service was virtually a prerequisite. And though the last three presidents have little or no military backgrounds, American history was largely written by commanders in chief who made their name in uniform.

Task & Purpose compiled the list of the most badass military men to ever make it to the Oval Office, presented here in chronological order.

This is a no-brainer. Washington commanded the Continental Army and defeated the far better equipped British military during the American Revolution. He turned the tide of the war Christmas night 1776, when he crossed the Delaware River as part of a surprise attack. He resigned his post as commander of the continental army after he defeated the British, affirming his commitment to democracy and separation of powers.

But he eventually went on to become the nation’s first commander-in-chief, anyway, and was the first (and only) president to personally lead troops into battle, when in 1794 an aging Washington boarded his horse and led 13,000 men to Pittsburg to quell the Whiskey Rebellion.

Jackson perhaps is America’s most badass president, if not also one of the worst. He is the only president to serve in both the Revolutionary War and the War of 1812. Jackson rose to national prominence in the Battle of New Orleans, which would have totally won the War of 1812, had the war not already been won. But the victory earned him a promotion to the rank of major general in the U.S. Army, and command over much of the southern United States.

He went on to win the presidency, making him the first (and again, only) U.S. president to have killed a man in a duel. He later survived the first attempted assassination of an American president by beating the shit out of the would-be assassin with his cane.

Related: The long history of presidential scandal and U.S. politics.

Taylor was the hero of the Mexican-American War, earning a series of tough victories where his forces were often outnumbered. He earned the nickname “Old Rough and Ready,” because he didn’t much care for pomp and circumstance, but was a brilliant and effective military tactician. In his first major battle, the Mexican city of Monterrey was so heavily fortified, it was considered “impregnable.” In the Battle of Monterrey, outnumbered by more than 1,000 men, Taylor took it in three days.

He was then ordered to send his men to Veracruz to reinforce Gen. Winfield Scott, but left a few thousand men behind in Buena Vista. Mexican leader Santa Anna found out, and attacked Buena Vista with more than 15,000 troops. When Santa Anna demanded surrender, Taylor’s aide replied, “I beg leave to say that I decline acceding to your request.”

Taylor’s forces repelled the Mexican attack, all but ensuring victory in the war. He used his national prominence to win the election of 1848, running on a platform of preserving the Union over deep divides over slavery, but unexpectedly died of natural causes after just 16 months in office.

Undoubtedly one of the most legendary generals in American history, Grant cut his teeth in the Mexican-American War, when during the Battle of Chapultepec, the young West Point graduate reportedly dragged a howitzer into a church steeple to bombard Mexican forces. He left the Army in 1854, reportedly over misconduct involving alcohol, and is said to have wanted to start a career as a school teacher.

But after war between the states broke out in 1861, Grant found himself back in the Army. He commanded troops in a string of military victories down the Mississippi River, the war’s western frontier. He eventually became the commander of the Union Army, and accepted confederate leader Gen. Robert E. Lee’s surrender at Appomattox.

He won the presidency in the election of 1868 and served two terms, largely focusing on reconstructing the Union after the Civil War.

Roosevelt resigned his post as assistant secretary of the Navy in 1898 when war broke out in Cuba. He created the first American all-volunteer cavalry regiment, popularly referred to as the Rough Riders, and set off for Cuba. He led impressive victories at Kettle Hill and San Juan Hill.

For his actions at San Juan Hill, Roosevelt received the Medal of Honor, albeit posthumously, from President Bill Clinton in 2001.

After the war, he became governor of New York, and later, vice president of the United States under President William McKinley. After McKinley was assassinated by an anarchist, Roosevelt was sworn in as president in 1901. He won re-election in a landslide in 1904, but declared he wouldn’t seek another term before his inauguration.

Roosevelt grew disheartened with the advancement of the Republican Party and sought the presidency in the election of 1912 under a new progressive party called the Bull Moose Party. Campaigning in Milwaukee, Wisconsin, in October 1912, he was shot in the chest shortly before a speech. The bullet was slowed by his steel eyeglass case and a thick copy of the speech he kept in his jacket pocket. He decided to deliver the speech, anyway, and spoke for 90 minutes before seeking medical attention.

“Ladies and gentlemen,” he said as he took the stage, “I don't know whether you fully understand that I have just been shot; but it takes more than that to kill a Bull Moose.”

Eisenhower attended West Point and served as a young lieutenant in the U.S. Army in World War I, but completely missed battle, leaving him disheartened for years.

In December 1943, Eisenhower received his fourth star and was named by President Franklin D. Roosevelt to be the Supreme Allied Commander Europe. He went on to plan and lead the 1944 assault on Normandy, which was instrumental to Allied victory.

He eventually became general of the Army; Army chief of staff; and in retirement, president of Columbia University.

He ran for president as a Republican in 1952 and won in a landslide, serving two terms.

After a chronic lower-back injury made him ineligible for service in the U.S. Army, a young Kennedy was commissioned as an ensign in the U.S. Navy in 1941.

In 1943, he commanded PT-109, a patrol torpedo boat with a crew of less than 20. On Aug. 2, 1943, PT-109 was rammed by a Japanese destroyer while on a routine patrol in the Solomon Islands. He gathered his crew in the water around the wreckage and asked a simple question: “There's nothing in the book about a situation like this. A lot of you men have families and some of you have children. What do you want to do? I have nothing to lose.”

His men chose not to surrender, and Kennedy led his men to a nearby island, including towing a badly wounded man to shore with the strap to his life jacket clenched in his teeth.

According to his Navy and Marine Corps Medal citation, Kennedy “unhesitatingly braved the difficulties and hazards of darkness to direct rescue operations, swimming many hours to secure aid and food after he had succeeded in getting his crew ashore.”

He was medically discharged due to his back injury in 1944 and successfully ran for Congress in 1946, Senate in 1952, and president of the United States in 1960.

His heroism helped boost his visibility for his political career. Kennedy was once reportedly asked how he became a war hero.

The last president to have a badass military record was George H.W. Bush, who upon his graduation from Phillips Academy in Andover, Massachusetts, deferred his admission to Yale University and accepted a commission as an ensign in the U.S. Navy.

He became a naval aviator at just 19 years old — the youngest ever at the time. On Sept. 2, 1944, Bush piloted a Grumman TBM Avenger on a mission to bomb a communications station on a small Japanese island called Chichijima. With him on the mission were two men — Radioman 2nd Class John Delaney and Lt. Junior Grade William White. Their aircraft was struck by intense anti-aircraft fire on the mission. With the cockpit filling with smoke and with Bush expecting the plane to explode at any minute, he completed his bombing run, flew as far as he could over the water, instructed the two men to bail out, and then parachuted out of the aircraft.

Bush was eventually rescued by the USS Finback, a submarine. The other two men were never found. The 20-year-old lieutenant junior grade was the only American service member recovered alive after being shot down over Chichijima.