Family dinners can be tense affairs. Doubly so if you’re related to one of the most despised human beings in... 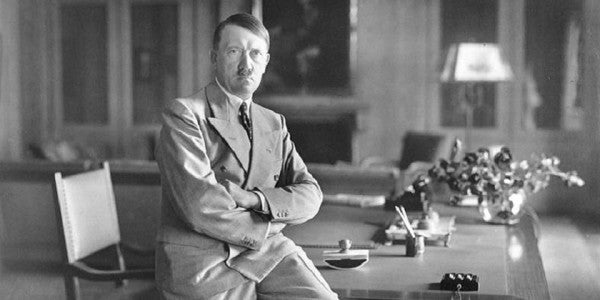 That time Adolf Hitler's nephew trash-talked him in a U.S. magazine...then enlisted in the Navy to fight in World War II.
SHARE

Family dinners can be tense affairs. Doubly so if you’re related to one of the most despised human beings in history: Adolf fucking Hitler.

Born in Liverpool, England, in 1911, William Patrick Hitler’s father, Alois Hitler, was brother to Adolf, and as William grew up, he was apparently an irritating and embarrassing thorn in his uncle’s side. Their tense relationship worsened substantially after he published numerous articles in the United Kingdom and United States detailing his uncle’s personal life. Thanks to Mark Frauenfelder over at BoingBoing, we can share some of those anecdotes.

In the July 4, 1939 edition of Look Magazine, a bi-weekly general interest magazine based in Des Moines, Iowa, the younger Hitler published a six-page feature entitled “Why I Hate My Uncle.”

There’s that bit about Adolf Hitler’s autographed photo, his preferred after-dinner snack, and his mannerisms:

“Being very close to my father at the time, he (Adolf Hitler) autographed this picture for me. We had cakes and whipped cream, Hitler’s favorite dessert. I was struck by his intensity, his feminine gestures. There was dandruff on his coat.”

Then there’s some disturbing implications about the suicide of Hitler’s half-niece:

“When I visited Berlin in 1931, the family was in trouble. Geli Raubal, the daughter of Hitler’s and my father’s sister, had committed suicide. Everyone knew that Hitler and she had long been intimate and that she had been expecting a child – a fact that enraged Hitler. His revolver was found by her body.”

Oh, and the descriptions of William Hitler’s visits to Germany, where he met with his uncle. Tense doesn’t really cut it:

“I published some articles on my uncle when I returned to England and was forthwith summoned back to Berlin and taken with my father and aunt to Hitler’s hotel. He was furious. Pacing up and down, wild-eyed and tearful, he made me promise to retract my articles and threatened to kill himself if anything else were written on his private life.”

“I shall never forget the last time he sent for me. He was in a brutal temper when I arrived. Walking back and forth, brandishing his horsehide whip, he shouted insults at my head as if he were delivering a political oration.”

William Hitler moved to the United States in 1939, and later changed his last name to Stuart-Houston. He also enlisted in the Navy during the war — yeah, in addition to slamming his piece of shit uncle in print, he signed up to fight in World War II. His initial attempts to join the Army were shot down, due to his family connections, but after writing an impassioned plea to President Franklin Delano Roosevelt, he was permitted to serve in the Navy, according to the Daily Mail:

“I am the nephew and only descendant of the ill-famed Chancellor and Leader of Germany who today so despotically seeks to enslave the free and Christian peoples of the globe. … More than anything else I would like to see active combat as soon as possible and thereby be accepted by my friends and comrades as one of them in this great struggle for liberty.”

It’s unclear if the early articles were published for noble reasons, or personal gain — rumors of the articles being an attempt at blackmail abound — but the fact that Hitler’s nephew signed on with the Navy to kick Nazi-butt makes us think he’d have been welcomed among the likes of the “Inglourious Basterds,” had they been real.