Remembering The Wars Of Our Fathers

“What did you do in the war, daddy?” It was a question we Baby Boomers often asked our fathers —... 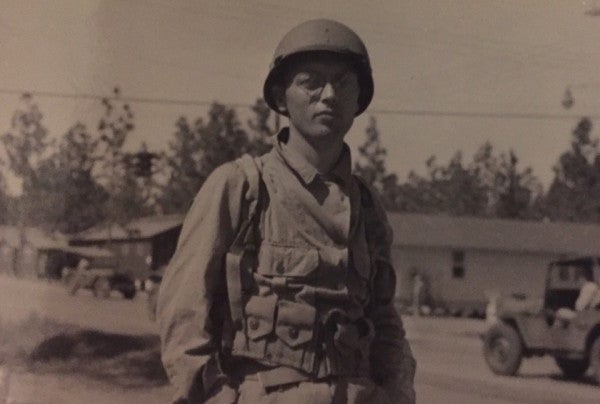 It was a question we Baby Boomers often asked our fathers — all of the millions of us whose fathers served during World War II, history's greatest conflict, and something that in our child minds we could not even begin to grasp.

I had practically forgotten that question until I was cleaning out the garage a few weeks ago, and for the first time in my adult years, discovered a trove of documentation, illustrations, and photographs of exactly what my father did during World War II. In his records were references to the good, the bad, and the ugly of why we had to win.

My father was 31 on Dec. 7, 1941. After Pearl Harbor, he made himself available for the draft. Because of his age and his Hollywood movie-making skills, he joined a Signal Corps unit that filmed the war. The forgotten family history welled up before me like old film as I found the photos and letters of a gentle man who loved his wife, and an infant son he had yet to see, my older brother, Phillip, who was born on Christmas Day, 1944. It was a GI homecoming of the kind that you can see in William Wyler's Best Picture Oscar classic of 1946, “The Best Years Of Our Lives.”

Some of his records concerned the day the war in Europe ended, with Hitler dead, the Nazis beaten, their surrender unconditional. Joyously, it was called VE Day: Victory in Europe. Across 70-plus years, my father smiled at me in a photo as he clutched a copy of Stars and Stripes, with the jubilant headline in huge block letters, “GERMANY QUITS.”

Histories of the day note that a million people turned out in the streets of London. My father was there, taking photographs, and being photographed. Tech Cpl. Carl Richard Anderson belonged to a Signal Corps film outfit, the 3908th Pictorial Service Unit, that processed most of the still photography and much of the combat film footage shot by Americans during the war.

Tech Cpl. Anderson was there for the joy, the relief, and the pandemonium of victory and survival. He did not weather the hails of steel on the landing beaches of D-Day, or fight for his life during the Battle of the Bulge, or any of the harrowing fights on land, air, sea. With 291,000 Americans killed in combat, he numbered among the millions of Americans who made it home to build the world we know.

With hundreds of thousands of GIs, my father convoyed to Europe in seas that remained a hunting ground for Nazi U-boats and made it safely ashore with troops arriving just as the D-Day invasion launched.

When my father and the other members of his unit landed, London was menaced by a new threat of rockets and missiles. It was called the Second Blitz, less deadly than the first Blitz during the Battle of Britain, but still terrorizing, with explosives delivered by the so-called vengeance weapons: the V-1 buzz bombs, and V-2s, the world’s first ballistic missiles.

The V-2s could destroy an entire block. Their existence was a military secret whose knowledge was denied to the general public. My father's film unit divined a little more because they processed film gathered for bomb damage assessment teams. Such a photo was in my father's box.

In the 3908th, my dad was the official unit cartoonist, and with typical GI humor, he recorded the unit’s progress from basic training, across the water to England, and then to the continent. His drawings were sharp, sweet, funny.

So my father's war was one of processing and editing thousands of combat photographs. My father sent my mother a GI “V-Mail” postcard on VE Day — his Hollywood-style drawing of the sun rising over a globe circled by a triumphant B-17 Flying Fortress and the outsize letters “V-E Day.”

My father’s note to mom was, “Dear ‘Charlie,’ , We’re thankful that it has happened at last … and we can celebrate it in thought together, signed Carl”

But my father’s time in World War II was not finished. He would remain because combat soldiers with “points” went home first.

With the war ending, American troops liberated Dachau, the Nazi concentration camp that formed the master plan for Auschwitz and the others. With crematoria belching smoke as GIs arrived, they found railroad cars and streets of corpses, and the walking dead of the Third Reich.

Filmmaker George Stevens, who would direct such post-war classics as “Shane,” was traumatized at Dachau, saying he never, until then, understood what humans were capable of doing to one another. My dad was on the team who edited a film record intended for the Nuremberg war crimes trials. In the processing of raw, unedited film, my father found his war.

“He never got over it,” my mother told me shortly before my father died.

In the dusty storage box, I found a final drawing, the only one that lacked GI humor. The cartoon was captioned the “Atrocity Room,” the film lab where 3908th Signal team edited Nazi concentration camp film.

The cartoon showed a door with the Nazi SS-style “skull and bones” death’s head insignia. The drawing shows a pool of blood spilling under the door, and a scream, “Ah .. h .. h.. h!” peeling forth, and what looks crematoria smoke puffing through the open door. Amid the fleeting joy at victory, my father toiled away, editing atrocity. In one cartoon, my father’s war was expressed and the burden that he carried.

On this Father's Day, it reminds me of my father's role to relieve “a suffering humanity.”

I now know a little more about what you did in the war, daddy. And thank you.